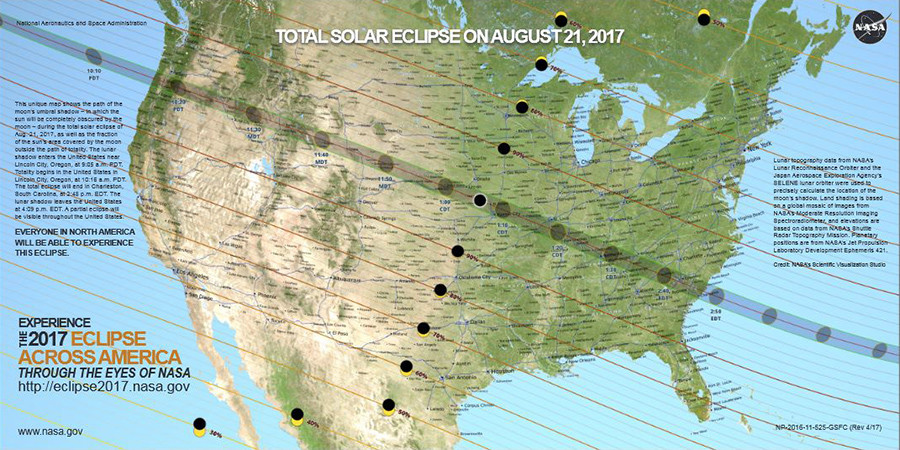 The US is set to experience its first coast-to-coast total solar eclipse in almost a century on August 21 – giving millions of Americans the chance to observe the rare celestial event.

NASA revealed details and viewing advice for the upcoming eclipse, which will see the moon pass between the sun and Earth, casting a dark shadow and making visible the solar corona – the sun’s normally obscured atmosphere, as well as bright stars and planets.

A total of 14 states from Oregon in the west to South Carolina in the east will experience more than two minutes of darkness in the middle of the day over a span of almost two hours.

This will be the first total eclipse in the US since 1979 and the first coast-to-coast eclipse since 1918.

The US will be the only country to experience the total eclipse. International visitors, however, are expected to descend on the country for the rare chance to see the sun disappear behind the moon, transforming daylight into twilight.

At least three NASA aircraft, 11 other spacecraft, and more than 50 high-altitude balloons, as well as the astronauts aboard the International Space Station, will capture images.

“Never before will a celestial event be viewed by so many and explored from so many vantage points – from space, from the air, and from the ground,” Thomas Zurbuchen, associate administrator of NASA’s Science Mission Directorate in Washington said.

NASA is warning potential viewers to put safety first and use specialized solar viewing glasses to observe the non-eclipsed or partially-eclipsed sun.

The space agency says it’s safe to look at the total eclipse with the naked eye only during the brief period of totality, which will last about two minutes, depending on location.

NASA will broadcast live video of the celestial event, along with coverage of activities held across the country in its honor.