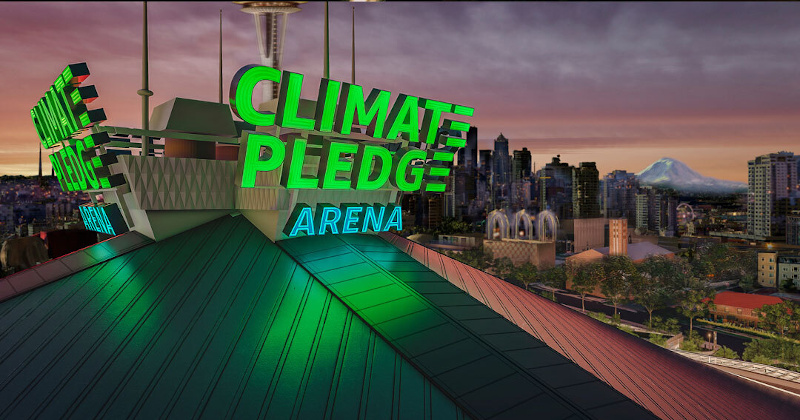 Amazon boss and world’s richest man Jeff Bezos has bought the naming rights to Seattle’s KeyArena complex, and will rename it Climate Pledge Arena. Yet, behind the gesture lurks a company accused of eco-hypocrisy.

Bezos announced the purchase in an Instagram post on Thursday, saying the name will serve “as a regular reminder of the urgent need for climate action.” The e-commerce kingpin said that the National Hockey League (NHL) venue will “be the first net-zero-carbon-certified arena in the world,” will generate no waste, and will use reclaimed rainwater in its ice system.

I’m excited to announce that Amazon has bought the naming rights to the historic Seattle arena previously known as KeyArena. Instead of calling it Amazon Arena, we’re naming it Climate Pledge Arena as a regular reminder of the urgent need for climate action. It will be the first net zero carbon certified arena in the world, generate zero waste from operations and events, and use reclaimed rainwater in the ice system to create the greenest ice in the NHL. #ClimatePledge

Last September, Bezos announced that his firm would team up with a number of other corporations to meet the goals of the Paris Climate Agreement 10 years early. President Donald Trump formally pulled out of this multilateral accord last year, saying the pledge favored China and put the US economy “at a permanent disadvantage.”

Amazon launched a $2 billion fund earlier this week to invest in clean technologies, on top of the $10 billion in grant money he donated earlier this year via his Bezos Earth Fund. It was a canny move for the multibillionaire, as the world’s financial heavyweights consider the sector a veritable goldmine.

One conglomerate, the Climate Finance Partnership, views our heating planet as “the climate opportunity.”Another, whose members include HSBC, JPMorgan Chase, and Citi has called for a massive influx of private and taxpayer cash to fight global warming in the developing world, titillating governments and investors alike with promises of “profits to be had.”

Today @amazon, @oakviewgroup & @NHLSeattle_ announced a partnership that will name the New Arena at #SeattleCenter, #ClimatePledge Arena. It will be the first net zero carbon certified arena in the world.

If the artistic renderings of the Climate Pledge Arena are anything to go by, Washingtonians will be able to see this testament to Bezos’s ecological idealism from miles away.

However, behind the carbon-neutral neon, Amazon still lobbies the oil and gas industry to sell them its cloud-computing services. Among these clients are hardcore polluters BP and ExxonMobil, as well as Saudi Arabia’s state-owned oil company, Saudi Aramco. Among other promises, Amazon promises to help these fossil-fuel firms “find oil faster,” and “recover more oil,” on the “digital oilfield of the future.”

Furthermore, while Bezos is free to preach the green gospel, his workers are not. According to a Guardian newspaper report earlier this year, Amazon threatened to fire employees who called on the company to do more to help the environment. The threats came even after Bezos made his much-publicized climate pledge last September.

Still, when Seattle’s NHL expansion team takes to the ice in 2021, those inconvenient truths will be outshone by the glowing green neon of the Climate Pledge Arena.