The US National Archives released thousands of long-awaited secret documents about the assassination of John F. Kennedy on Thursday.

A portion of the documents have, however, been withheld by President Donald Trump on the advice of the FBI and CIA, the AP reports. Here are the key revelations contained in the papers released so far:

The Soviet Union feared that the assassination of John F. Kennedy would lead to all-out war between it and the United States.

A CIA source cited in the documents claimed that officials in the Communist Party believed the killing was part of a conspiracy by the “ultra-right” in the US, and were concerned that “without leadership, some irresponsible general in the US might launch a missile at the Soviet Union.”

Soviet officials also described assassin Lee Harvey Oswald as “a neurotic maniac who was disloyal to his own country,” and played down the significance of his time within the Union.

Hoover was critical of the Dallas Police Department’s handling of the case, saying it could not have brought charges without the FBI’s involvement. “We traced the weapon, we identified the handwriting, we identified the fingerprints on the brown bag,” he said, adding that senior police had been seen too much on television.

The FBI director, working with then Deputy Attorney General Nicholas Katzenbach, was also eager to release information on the event “so we can convince the public that Oswald is the real assassin.” Oswald’s death was “inexcusable” following the FBI’s warnings, Hoover said, and added that it would open the door to elements who would “holler their heads off that his civil rights were violated – which they were.”

Cuban diplomats were ordered to “cease looking happy in public” following the killing of JFK.

According to one document, Cuban Ambassador Cruz was said to have reacted with “happy delight” after hearing news of the assassination, but became concerned when details filtered through of Oswald’s connections to a leftist Cuban activist group.

In a cable sent to Cuba’s consulates and trade offices in Toronto and Montreal, the ambassador said diplomats should adopt a more somber mood in public in order to reflect the government’s official attitude to the death.

FBI was tracking Oswald before assassination

Oswald was being tracked by the New Orleans division of the FBI in October 1963 – the month before the assassination took place.

An FBI report into the New Orleans division of the Fair Play for Cuba Committee said that, while the committee had been inactive since Oswald left the city, the bureau was planning to stay in contact “with Cuban sources for any indication of additional activity.”

Copies of the report were sent to FBI divisions in New York and Dallas, the city in which Kennedy was killed.

While Oswald’s visit to the Soviet Embassy in Mexico City in September 1963 had not been a secret, the files revealed that he had spoken with Consul Valeriy Vladimirovich Kostikov, described in the documents as “an identified KGB officer.” 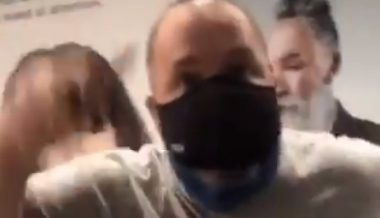