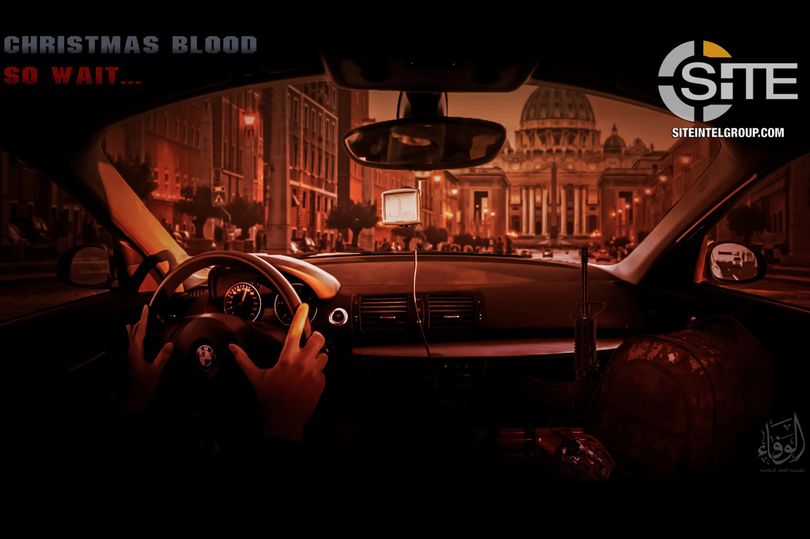 ISIS has issued a chilling threat against the Vatican just weeks before Christmas, where tens of thousands of people from around the world gather to celebrate the Christian holiday.

A pro-ISIS propaganda channel called Wafa Media made the threat through a poster depicting a vehicle attack, according to the Site Intelligence Group, who monitor terrorist activity.

A rifle and backpack can be seen next to the jihadist, who’s using GPS navigation and driving fast.

ISIS has made threats to the Vatican and Europe in the past, especially around the Christmas holiday.

France has decided to shutter their Paris Christmas Market, which sees around 15 million attendees every year, and instead will keep the Ramadan festival this year.

And UK-based supermarket chain Tesco launched a politically correct “Christmas” ad featuring Muslims, Sikhs and a gay couple, but no Christians – in an ad meant to celebrate the Christian holiday.

Too early to start talking about Christmas? Surely not!
However you do Christmas, we’ve got a turkey for you. #EveryonesWelcome pic.twitter.com/Iun5467JJi

Notably, Pope Francis also has a conciliatory view of ISIS, likening Islam’s spirit of conquest to Jesus’ sending out his disciples to spread the Word of God.

“It is true that the idea of conquest is inherent in the soul of Islam, however, it is also possible to interpret the objective in Matthew’s Gospel, where Jesus sends his disciples to all nations, in terms of the same idea of conquest,” the Pope told French media last year.

It’s not unreasonable to assume that if ISIS did manage to carry out an attack in the Vatican that the mainstream media would immediately downplay the carnage and demonize anybody as “racist” or “Islamophobic” who points out the radical Islamic fundamentalism that inspired the attack in the first place, the same way they did after the horrific Berlin Christmas market attack.

“Beyond the immediate panic and horror, there also appears to be a potentially more pernicious reward to the forces of the political far right best positioned to capitalize on such a tragedy,” wrote CNN’s David Andelman the day after the attack.

It's just a "truck crash," says CNN. Not an attack and definitely nothing to do with Islam. pic.twitter.com/ed8Z7bTmqG