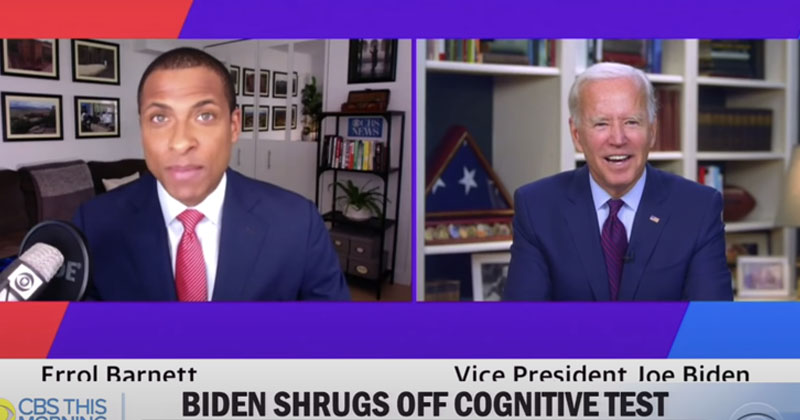 Democrat presidential candidate Joe Biden in another train wreck interview on Wednesday with CBS asked a black journalist if he was a junky for asking about taking a cognitive test ahead of the election in November.

During the National Association of Black and Hispanic Journalists convention, CBS correspondent Errol Barnett asked Biden if he’d be willing to take a cognitive test to assuage concerns from the Democrat base over his mental acuity.

Biden became defensive, asking “why the hell” would he need to take a cognitive test, saying that’d be like asking Barnett if he took cocaine.

“No, I haven’t taken a test!” Biden snapped. “Why the hell would I take a test? Come on, man! That’s like saying you…before you got in this program, you’re take [sic] a test whether you’re taking cocaine or not. What do you think? Huh? Are you a junkie?”

Biden did not elaborate how asking a black man about drugs is the same as asking a 77-year old about his cognitive abilities.

This response contradicts previous remarks he made in June when he said, “I’ve been tested and I’m constantly tested” for his mental capacity.

Notably, Biden’s 49-year old son Hunter has been in and out of rehab for his cocaine addiction.

Barnett swiftly moved on, asking Biden what he thinks about President Trump mocking his “mental state.”

“What do you say to President Trump who brags about his test and makes your mental state an issue for voters?” Barnett asked.

Biden stumbled and bumbled through his attempt at trying to make the argument that nobody understands what Trump is saying.

“Well, if he can’t figure out the difference between an elephant and a lion, I don’t know what the hell he’s talking about. Did you watch that — look, come on, man. I know you’re trying to goad me, but I mean . . . I’m so forward-looking to have an opportunity to sit with the President or stand with the President and the debates.”

It’s instances like these that are forcing Biden’s handlers to keep him hidden from the public as much as possible, and prompting several mainstream outlets to beg Biden not to debate President Trump.

Owen breaks down a possible money laundering scheme connected to Joe Biden and the Ukraine.