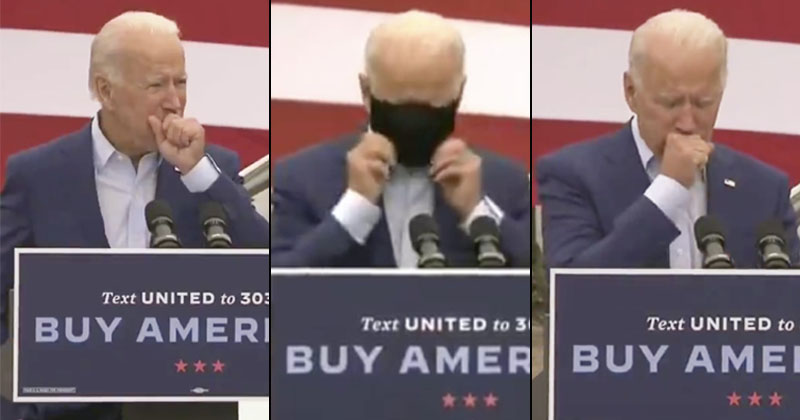 Democrat presidential candidate Joe Biden stumbled through another weak speech during a campaign stop in Michigan, coughing throughout while attacking President Trump and then wrapping up without taking questions.

Speaking in Warren on Wednesday to deliver a Trumpesque “Made In America” event, Biden attacked Trump for “lying” about the coronavirus, referring to audio of Trump telling liberal journalist Bob Woodward he downplayed the virus to prevent panic.

"He knew and purposely played it down. … He knowingly and willingly lied about the threat it posed to the country for months” https://t.co/BfoWL4UaMV pic.twitter.com/1RFrKRV3Ws

.@JoeBiden: "He promised his admin would enforce every last buy-in American provision… and what makes his wild claims and hopes—he now hopes we don't notice what he said, or won't remember. And when he does follow through, or doesn't do—when follow through, the exact opposite." pic.twitter.com/EF4VP6QN9P

At one point during his speech, Biden defended globalism while at the same time claiming he would revive American manufacturing, which received a few solitary claps from the audience.

In Michigan, Democratic nominee Joe Biden says, “Getting a good job in 2020, right here in America, shouldn't be a lottery. It should be an absolute expectation for everyone” pic.twitter.com/NXI4JOd1Qd

Biden was also seen frequently coughing into his hand while speaking.

He might want to get this checked out pic.twitter.com/BLpCz2eK5B

After his speech, the Democrat nominee quickly left the podium without taking a single question.

All in all, another predictable appearance by the ailing Democrat candidate.

Owen Shroyer And DeAnna Lorraine watch as Trump concludes his second rally of the day, as Biden is barely able to stay away through his garden party interview with an audience of four people.