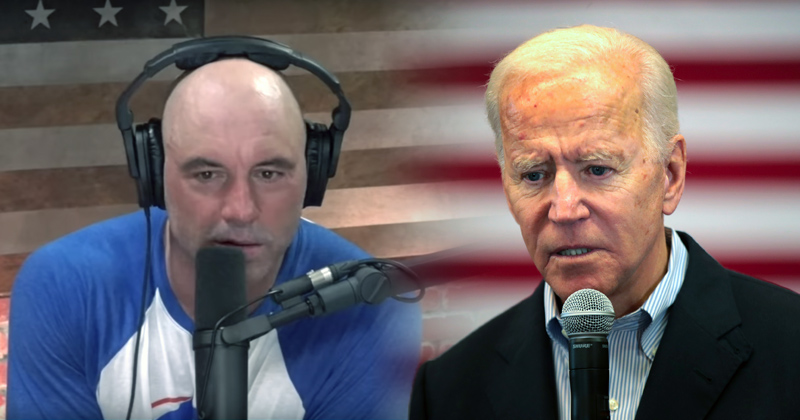 Prolific podcaster Joe Rogan is disappointed Democrats appear to have settled with Joe Biden as the party’s 2020 presidential frontrunner.

In a recent episode of the “Joe Rogan Experience,” Rogan clarified his political stance after recent reports suggested he supports President Donald Trump, explaining he’d vote for anyone besides Biden because he believes the former Vice President exhibits symptoms of dementia.

“I just don’t think it’s a good idea to take someone who’s struggling with dementia and put em in one of the most stressful positions the world has ever known. That’s what I’m saying.”

Rogan wasn’t done with Biden yet.

“I mean it’s not an endorsement of Trump as it is me saying you shouldn’t have a man who’s clearly clearly in the throes of dementia… I mean there’s… I’m not a doctor, but when you can’t form sentences in public, and you forget what you’re talking about, and you wander off into these conversations…”

Rogan explained Biden’s apparent “cognitive decline” likely has to do with his old age, and questioned why Dems would choose him to lead the party.

“I don’t know why the Democrats thought it would be a good idea to take someone who’s clearly got a problem,” Rogan said, going on to list a slew of Biden’s recent gaffes.

“When people got upset at… me saying that… I’d probably vote for Trump before I would vote for Biden, I’m literally saying I’d vote for anybody that can talk. I mean anyone who’s not in severe cognitive decline… Shit, I’d vote for Hillary before I’d vote for him.”

The perplexed host rounded out his remarks on the subject by describing Biden’s presumptive nomination as “confusing.”

“I mean, I just think the poor guy shouldn’t be in the position he’s in. I don’t understand why they’re doing that. I mean anyone else could have been… Tulsi Gabbard, Amy Klobuchar, Pete Buttigieg… pick a person. They all would have been a better choice. I mean this is crazy, and I don’t know what their strategy is. I don’t know why they decided to do this. It makes no sense to me it’s very very confusing.”

Interesting to note: during the Crenshaw interview, Rogan wore a Space Force shirt, sold at the Official Donald Trump Store.

Joe Rogan revealed on a podcast with Hotep Jesus that the last episode of The Joe Rogan Experience featuring Alex Jones was one of the biggest podcasts of all time.