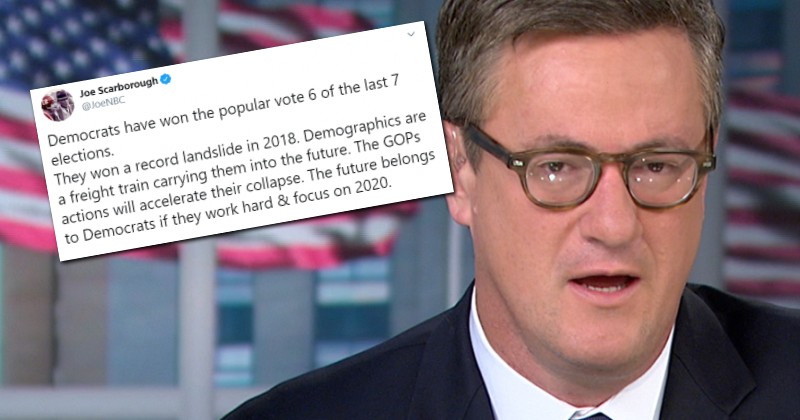 Joe Scarborough is celebrating the fact that a demographic “freight train” will secure electoral success for Democrats far into the future and lead to the “collapse” of the GOP.

The former Congressman and current MSNBC host tweeted, “Democrats have won the popular vote 6 of the last 7 elections. They won a record landslide in 2018. Demographics are a freight train carrying them into the future. The GOPs actions will accelerate their collapse. The future belongs to Democrats if they work hard & focus on 2020.”

Democrats have won the popular vote 6 of the last 7 elections.
They won a record landslide in 2018. Demographics are a freight train carrying them into the future. The GOPs actions will accelerate their collapse. The future belongs to Democrats if they work hard & focus on 2020. https://t.co/Rrvm39xi4n

Scarborough’s rhetoric is similar that of presidential candidate Joe Biden, who previously hailed an “unrelenting stream of immigration,” leading to whites becoming a minority, which he said was “not a bad thing” and something to be “proud of.”

Biden: Whites being a minority in America is a "good thing". pic.twitter.com/drQ0FxtUtM

It also sounds similar to what was said at a recent Leadership Conference on Civil and Human Rights when a speaker referenced what had happened in South Africa before remarking, “People say that demographics aren’t destiny, well we are trying to make it destiny.”

This is yet another example of how it’s only considered acceptable to talk about huge demographic changes if you’re in favor of them.

Suggesting that a drastic decline in the white population will change America for the worse is treated as at best virulent racism and at worst a dog whistle to genocidal neo-nazis.

Meanwhile, celebrating the demographic decline and replacement of white people in order to turn traditionally red states blue is exalted as some kind of progressive virtue.

How Voters Turned #Virginia from Deep Red to Solid Blue.🇺🇸💙

“People are just sick and appalled (at @realDonaldTrump). He’s the best thing Republicans have done for Democrats in a long time.”😎#BlueWave #VoteBlue2020 https://t.co/IjcSkDv2dl