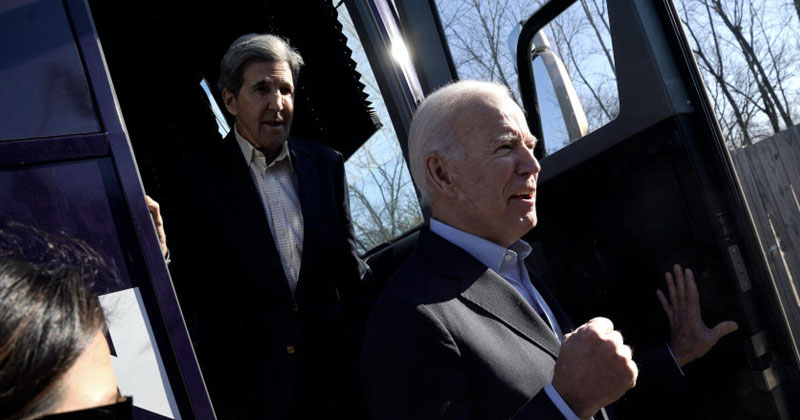 Former Secretary of State John Kerry joined Joe Biden on his Iowa bus tour to laud the former vice president as the savior of mankind to defeat Donald Trump in 2020.

75-year-old Kerry endorsed 76-year-old Biden and joined him on his “No Malarky” bus tour Friday to promote Biden as the fresh young face of the Democrat Party who can beat President Trump in the upcoming presidential election.

Question: "Mr. Vice President, how does it feel to have your friend with you?"

Joe Biden: "It feels great to have my friend with me, I can’t think of anybody I’d rather have."

John Kerry: "I’m thrilled to be back in Iowa. I love it." pic.twitter.com/TksFT68zmq

During a subsequent speech in Decorah, Iowa, Kerry promoted Biden as the only man who can “put the world back together.”

“Iowa, when you caucus in February, don’t just send a message. Send us a president. Send us a man who can put the world back together. Send us Joe Biden,” Kerry said.

John Kerry: "Iowa, when you caucus in February, don't just send a message. Send us a president. Send us a man who can put the world back together. Send us Joe Biden." pic.twitter.com/tYMa0krH3u

Nothing can fire up the party of identity politics better than two old establishment white guys promising more “hope and change,” right?