Former National Review editor Jonah Goldberg flipped out during a Q&A on Wednesday after being asked why his former “conservative” news outlet smeared the Covington Catholic students by saying they were “evil” and “might as well have just spit on the cross.”

The question was asked as part of a Q&A put on by the Young America’s Foundation.

The questioner, who goes by Turkeytap on Twitter, told Goldberg: “Your colleague at the time, [National Review deputy managing editor] Nicholas Frankovich, wrote a article titled, ‘The Covington Students Might As Well Have Just Spit On The Cross,’ in which they condemned the students as ‘evil.'”

He continued: “My question for you is, instead of tacitly defending this piece on Twitter, why didn’t you stand up for innocent, young American patriots?”

Goldberg responded by saying Frankovich “made a mistake” in a “blog post late at night” and said it was unfair to make it “representative of all of what National Review stands for” as that is “flatly untrue.”

“He apologized for it, you are bringing it up as if it’s this incredibly important moment in American culture and American right when it is utterly trivial,” Goldberg said. “Most conservatives freaked out about the Covington thing … Everybody from Fox News to National Review lost their minds about that thing.”

America is in a civil war against globalist forces attempting to complete its takeover. But Americans are awake & fighting back! Tune In!
The Black Friday sales have arrived early! Get up to 70% off our hottest products as well as free-shipping and double Patriot Points while the sale lasts!

Goldberg went on to claim the “real significance” of “the Covington thing” is “the perniciousness of social media” which “makes people get all passionate about stuff in the moment and everyone gets just desirous to win the race to be wrong first.”

For the record, I as one man with zero budget and one little website wrote an article exposing the hoax on Jan 19 within hours of the first videos going viral on Twitter after getting in contact with one of the Convington Catholic students. Over 2 million people read and shared my article and the videos embedded within it went viral on Twitter thanks to tons of independent actors on social media who actually cared about the truth.

“Covington Catholic student bothering elder man” yet here is evidence of the man approaching them during their school cheer not disturbing anyone. Doesn’t make sense pic.twitter.com/SRYRJOIoKf

Frankovich’s peice was posted to the National Review on Jan 20 at 2:55 AM and Frankovich tweeted it out himself at 7:52 AM EST later that morning, which was many hours after the hoax had been exposed by honest actors. 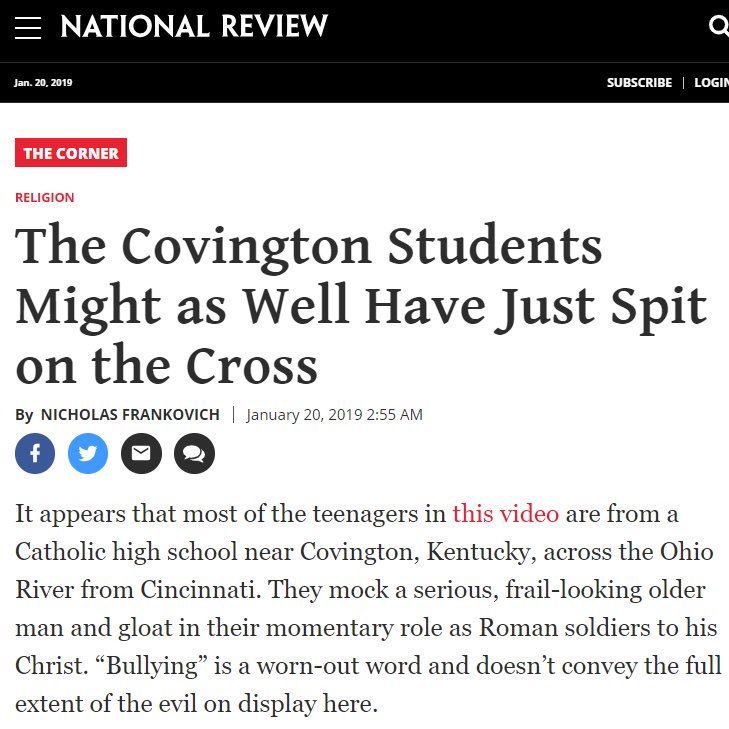 The post was absolutely “representative of all of what National Review stands for” as fellow NRO editor Rich Lowry similarly rushed to chastise the Covington kids at the height of the media’s smear campaign: After the truth started to win out — thanks in no part to the NRO and other Conservatism, Inc. shills who joined the pile on — Lowry shared a tweet saying the Covington students were “obnoxious, dumb and disrespectful” and “needed” to produce an apology “regardless.” In contrast, Goldberg’s NRO in the past literally ran a glowing a propaganda piece from Jeffrey Epstein’s publicist to help rehabilitate Epstein’s image in the wake of his conviction for soliciting a minor! 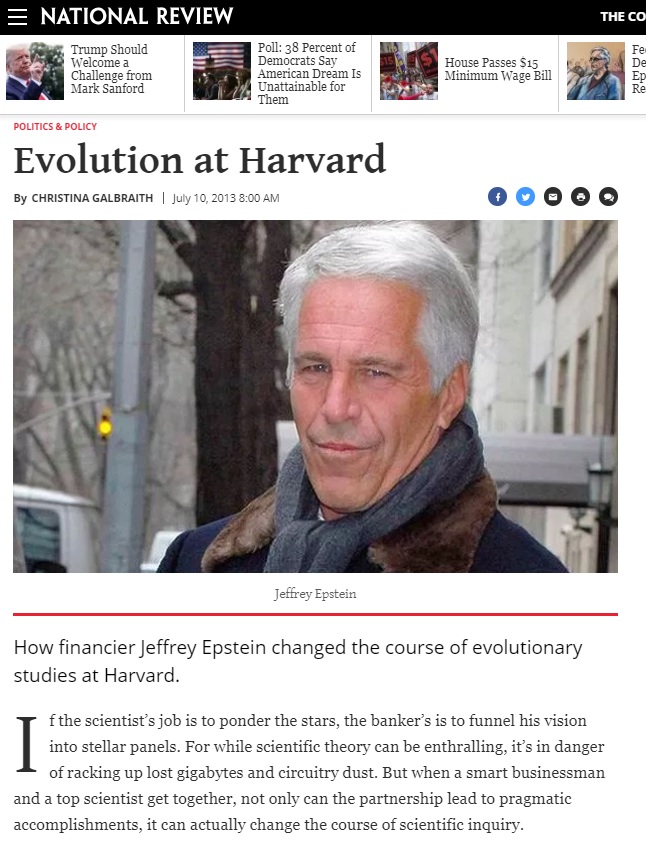 The Convington Catholic story was not “utterly trivial” — it was the most important story of the past decade as it showed Conservatism, Inc. will always side with the liberal establishment over the base they claim to represent when it matters most.