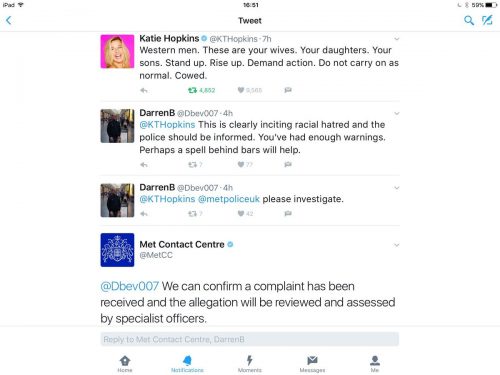 Prominent British journalist Katie Hopkins has denounced the course of action taken by Western governments who have opened the borders to terrorists while telling their citizens to accept attacks – and the resulting police state – as the new norm.

“We’ve just had the threat level raised to ‘critical,’ which is the maximum level, and military are coming into our streets,” she told Tucker Carlson. “What I always wonder, Tucker, is how did we go from saying, ‘We are strong, we stand united, we are not cowed,’ to tanks arriving on our streets.”

“My children at breakfast this morning said, ‘You know what, I would much rather be shot than caught in a bomb that’s made of ball bearings,’ and I just wonder – what kind of conversation are we having here in 21st century Great Britain when that’s what children are growing up with?”

“Children are growing up with terror being normal and a man planting a bomb with nuts and bolts when they’re out having fun – that’s normal in Britain,” she said.

She pointed the blame directly at British politicians for bringing war to the streets of the UK through immigration policies that have invited thousands of migrants from regions where terror attacks and barbaric street violence are a part of everyday life.

“We brought that war into our country; we brought that war onto our pavement, onto our streets,” she assessed. “I don’t hear anybody, any politician saying, ‘I am sorry. We were wrong. We are going to change what we have done. Islamic extremism can’t go on.’”

Hopkins is currently being investigated by Metropolitan Police after anti-free speech patrols on Twitter reported her reaction to the Manchester suicide bombing as “inciting racial hatred,” and threatened her with “a spell behind bars” to correct her thought crime.

“Western men. These are your wives. Your daughters. Your sons. Stand up. Rise up. Demand action. Do not carry on as normal. Cowed,” she wrote.

“It’s mindblowing that London police will spend manpower censoring free speech on Twitter while children are being targeted in terrorist attacks, but this isn’t accidental,” reported Infowars’ Kit Daniels. “By preventing people from speaking out against the government policies that fuel terrorism, the establishment can condition the public into believing they are helpless in stopping the flood of military-age migrants into the country.”

The mainstream media echoes the sentiments of Western governments and is propagandizing the citizenry with the concept that we must accept the policies degrading our level of security – and also keep our mouths shut lest we also be investigated for dissenting.

BBC host Katty Kay appeared on MSNBC’s ‘Morning Joe’ after the Manchester bombing, and chillingly declared that Europeans must “get used” to slaughter at the hands of jihadists.

“Europe is getting used to attacks like this, Mika. They have to, because we are never going to be able to totally wipe this out,” Kay said. “As ISIS gets squeezed in Syria and Iraq, we’re going to see more of these kinds of attacks taking place in Europe and Europe is starting to get used to that.”