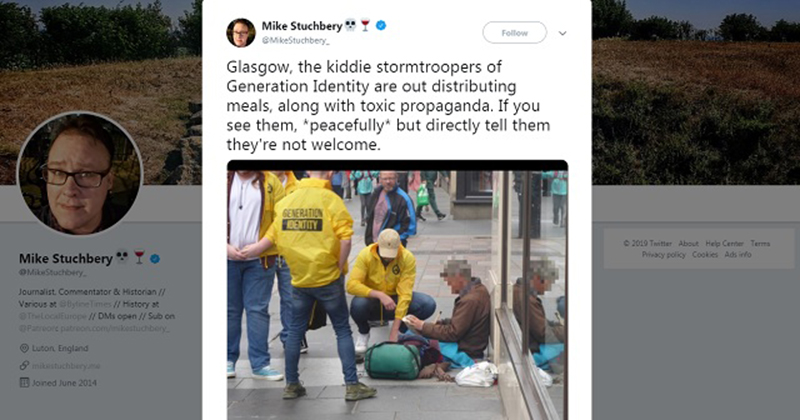 Blue check Twitter journo Mike Stuchbery issued a warning over the weekend to the citizens of Glasgow, Scotland that the right-wing group Generation Identity UK “are out distributing meals, along with toxic propaganda.”

“Glasgow, the kiddie stormtroopers of Generation Identity are out distributing meals, along with toxic propaganda,” Stuchbery tweeted Sunday afternoon. “If you see them, *peacefully* but directly tell them they’re not welcome.”

Stuchbery shared a picture of the group helping feed a homeless Scottish man living on the street.

Perhaps the authorities could be called to rip the meal out of this homeless man’s hands, lest he become seduced by their “toxic propaganda” through being given a warm meal.

Damn kids and their feeding of the homeless. Bloody outrage.

Are we gatekeeping feeding the homeless now

Grown men are now getting arrested for participating in a trend of licking food at the the grocery store and putting it back.

Perhaps more shockingly, the UK media jumped all over the story. The Times ran the most hysterical propaganda piece on Tuesday about their homeless feeding expedition, titled: “Extremists linked to mosque killer prey on homeless.”

On the left are members of @GID_Scotland, preparing to distribute food to the homeless in Glasgow. This is how @thetimes decided to report on it.

Declining readerships and increased competition are driving once reputable publications to hysteria and click-bait tactics. pic.twitter.com/gbyAlplmZz

Generation Identity UK leader Benjamin Jones responded to the piece in a statement on their website saying the article was “one of the most shocking examples” of mainstream media “hysteria and hysteria and catastrophising” he’s ever seen as all they were doing was “distributing food to the homeless.”

Jones said despite the media’s hysteria they’ll “continue to help the homeless throughout the UK and, naturally, Glasgow.”