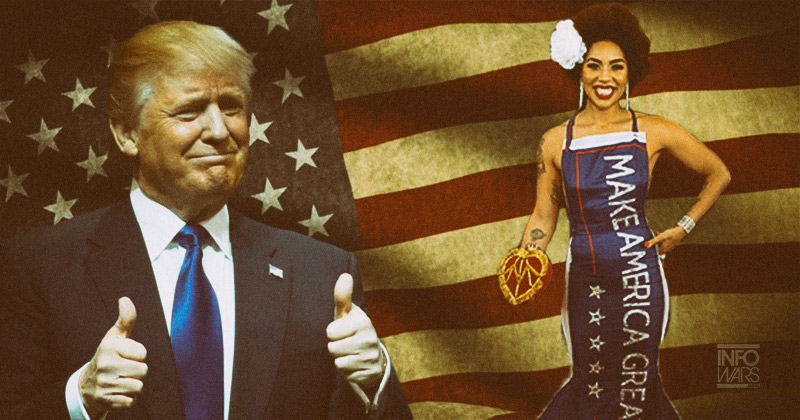 Villa met with former Trump chief strategist Steve Bannon to discuss strategy and acknowledged her decision “has to be tactical” and said, “If I run, I’m gonna win.”

Bannon told Villa that she is a fighter and said he wants her to be his “Honey Badger.”

Villa talked about the need for good people in office who will put forth the aims of the people, not just their own agenda.

“We’ve got the Frederica Wilsons, the Maxine Waters and the Nancy Pelosis who are destroying this country and it’s time for strong women to step up, run, win and support the president of America and I’d be honored to be one of those,” she said.

President Trump encouraged the prospect of a congressional run and gave Villa a shoutout on Twitter, saying, “good luck.”

Good luck to @Joy_Villa on her decision to enter the wonderful world of politics. She has many fans!

Villa responded within the hour, telling Trump, “You are my ultimate warrior role model…it’s our time to keep winning!”

When asked if she had any aspirations to run for president one day, Villa replied, “Yes.”

Touching on the subject, Villa admitted it wouldn’t be any time soon, but explained that she would step up to the plate if the country needed her.

Infowars and Villa have had a symbiotic relationship ever since she wore a MAGA dress to the Grammys in an act of defiance directed toward the liberal Hollywood elite.

President Trump also joined Infowars for a groundbreaking interview during his campaign.