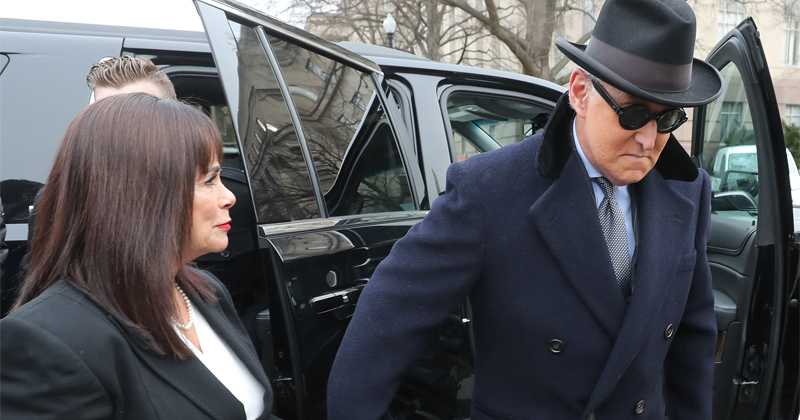 Roger Stone’s lawyers filed an emergency appeal with the DC Circuit Court of Appeals to appeal Judge Amy Berman Jackson’s frightening ruling denying Stone’s motion to delay his surrender date because of the dangers of Covid-19.

Jackson ordered Stone to report to prison on July 14th in Georgia at the height of spiking cases in and out of Georgia prisons.

Stone does not think that the appeals court will hear the matter and instead will refer it back to Judge Jackson.

“I have filed this appeal because the Judge’s decision is wrong on the law, the precedents in the DC Circuit and in all cases, including other circuits, for COVID-19 delayed surrender and compassionate release since the pandemic began,” Stone said. “It is also based on her incorrect assertion that the prison she wants to send me to has NO confirmed cases of COVID-19.”

“I recognize that the chances are overwhelming that the appeals court will remand the matter back to Judge Jackson, but it is vitally important that the American people see all of the incorrect claims in her most recent ruling.”

“As for the hysterical Democrats who insist that I have been given ‘Special Treatment’ by the Justice Department, I would point out that although Jackson’s ruling went against the DOJ’s own uniform policy to agree to 60-day extensions in surrender due to COVID-19, the DOJ is now opposing my emergency motion on appeal even after not opposing it originally.”

“I want the President to know that I have, in good faith, exhausted all of my legal remedies and that only an act of clemency by the President will provide Justice in my case.”

“This is a case in which I was charged on politically motivated, fabricated charges and was denied a fair trial by an unbiased judge, an honest jury, and uncorrupted and non-political prosecutors. It is important that people understand that the same people who attempted to destroy General Flynn and are attempting to destroy me, are the same people who tried twice to illegally and seditiously remove the president from office.”

Here are a few points to note in Stone’s case:

For those who say US Attorney General William Barr is giving Stone “special treatment” – the DOJ, which did NOT oppose Stone’s request for a delay in his surrender – will OPPOSE his appeal.

Judge Jackson did not treat Stone the same as “similarly situated” defendants. In fact, she ignored decisions (precedents) in her own circuit and every other circuit where motions for compassionate release have been filed since the pandemic began.

The judge denied his routine [unopposed by the DOJ] motion to extend his surrender date based on compelling medical issues in time of crisis.

Judgment of conviction in other cases such as the Benjamin case, (DC Circuit) cited in Stone’s unopposed motion, entered on the very same day as in Stone’s case resulted in that person not being required to report to prison until September 3.

Judgment of conviction in Gana (DC Circuit) filed only four days after judgment in Stone’s case resulted in that person not being required to report to prison until August 30.

Judge Jackson did not find that Stone is a danger to the community or a risk of flight.

The Judge’s claim that there are NO Covid-19 cases at the Federal Correctional Institution, Jesup, where Stone is ordered to report on July 14, is inaccurate.

There now is information demonstrating that these facts have changed in the last few days, with at least six inmates and five staff at FCI Jesup testing COVID-19 positive.

The facility is in quarantine status.

Even more alarming, just 10 days before Judge Jackson denied Stone’s request to delay his date to report to the prison, another federal judge ordered the release of a convicted sex offender and child pornographer from that same prison, based on undisputed, front line, first-hand evidence of the dramatic risks of exposure to the COVID-19 virus at that very prison.

The evidence is that even the most fundamental protections, like wearing masks and social distancing are nowhere in evidence and the prison staff comes and goes from outside the prison each day, in a state with record-number reported cases of COVID-19 spiking each day.

Stone wants his report date to be moved from July 14, 2020 to September 3, 2020 because Stone’s incarceration at this time poses a life-threatening risk. He is at considerable risk from serious health consequences, including death, if his surrender date is not extended.

The Department of Justice has a policy, in light of the COVID-19 pandemic, not to oppose a defendant’s request to extend a voluntary surrender date for up to 60 days, unless the defendant poses an immediate public safety or flight risk. The government does not oppose Stone’s motion to extend his surrender date until September 3, 2020.

Courts across the country have recognized the serious risks presented by the COVID-19 pandemic and have extended surrender dates. Courts around the country have even granted bail in cases in which defendants with lengthy criminal histories, dangerousness, and more serious offenses, based on COVID-19 and the risk it poses.

Stone would face, in the close confines of a BOP facility, based on his age and medical conditions, a very good chance of dying.

His doctor, Dr. Islon Woolf, in a letter dated June 17, 2020, wrote to the court that Stone’s medical conditions make the consequences of his exposure to COVID-19 in a prison facility life-threatening.

His doctor recommends the following:

“I highly recommend that he maintain strict quarantine conditions. He should not be in any situations that would expose him to the SARS-COV-2 virus. He needs to maintain at least 6 feet distance from people. He should avoid closed quarters with many people. He must completely avoid exposure to people with high rates of infections. He needs to avoid shared facilities like shared bathrooms. In my opinion, I do not see how any of these conditions could be met in prison. I am concerned for his health.”

Ignoring Dr. Woolf’s medical opinion, Judge Jackson suggests that Stone would not be in danger given that his condition is “medically controlled” and that there are currently no reported COVID-19 cases at Jesup, which is factually wrong.

The judge makes no allowance for the fact that Stone’s medical conditions require close monitoring and strict compliance with the directions of his physician, to remain controlled within a BOP facility.

Making Stone report to prison in the height of the pandemic, notwithstanding his documented health problems, which his physician believes place him at heightened risk not only of infection and complications from infection, but of death is an astonishing injustice.

What if he were to die in prison, when all kinds of prisoners and convicts are being released or whose surrender is delayed?

Stone represents no danger to society. What is the rush to put him behind bars during a pandemic?

Stone represents no danger to society. What is the rush to put him behind bars during a pandemic?

The highly partisan Judge Amy Berman Jackson or Pres. Donald Trump who ought to have pardoned him by now.

Both would be to blame, in my opinion.

Roger Stone clearly states that he will not commit suicide in prison.