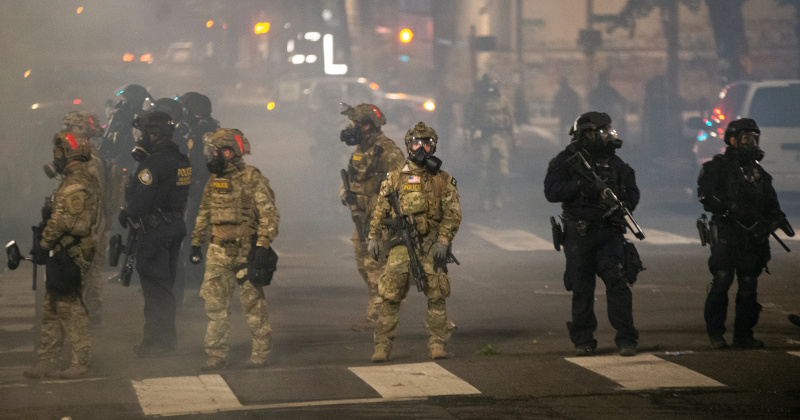 A judge has issued a restraining order against federal agents deployed in Portland, Oregon, who U.S. President Donald Trump said he sent to protect federal property against anti-police and anti-racism protesters.

“This order is a victory for the rule of law,” the interim director of the ACLU’s Oregon office, Jann Carson, said. “Federal agents from Trump’s departments of Homeland Security and Justice are terrorizing the community, threatening lives, and relentlessly attacking journalists and legal observers documenting protests. These are the actions of a tyrant, and they have no place anywhere in America.”

There has been no reaction so far from Trump the administration.

Wheeler coughed and was dazed, telling others he had never been tear-gassed before, but was otherwise unhurt.

Some demonstrators who did not want the mayor there, yelled at him, chanting “Shame on you,” believing he could be doing a better job to protect the city from federal forces.

But Wheeler has said he wants the agents to leave, calling their presence an abuse of federal authority and an incitement for violence.

Justice Department Inspector General Michael Horowitz announced Thursday an investigation into the use of force by federal agents in Portland and Washington, where tear gas was used to clear an area across from the White House last month before Trump crossed the street to stand in front of a church.

Demonstrators have marched in Portland every day for nearly two months responding to the May 25 death of George Floyd, a Black man, while in custody of white police in Minneapolis. Although the protests have been mostly peaceful, there have been instances of violence, arson and vandalism.

Federal law enforcement agents are being dispatched as part of Operation Legend to Chicago after a surge in gang violence that has left about 100 dead in the last several weeks. Agents are also being sent to Albuquerque, New Mexico, and Kansas City, Missouri.

The mayors of these three cities and 12 others have sent a letter to federal authorities calling for the immediate withdrawal of their forces and to “agree to no further unilateral deployments in U.S. cities.”

David Chipman, a senior policy adviser at the Giffords Law Center to Prevent Gun Violence, told VOA that when he was an agent for the Bureau of Alcohol, Tobacco, Firearms and Explosives, “I was proud to work with local leaders when they needed help righting wrongs.”

Chipman said Trump’s recent actions in Portland and his statements about problems in other cities “make clear he thinks federal law enforcement are his personal chess pieces for partisan power grabs.”