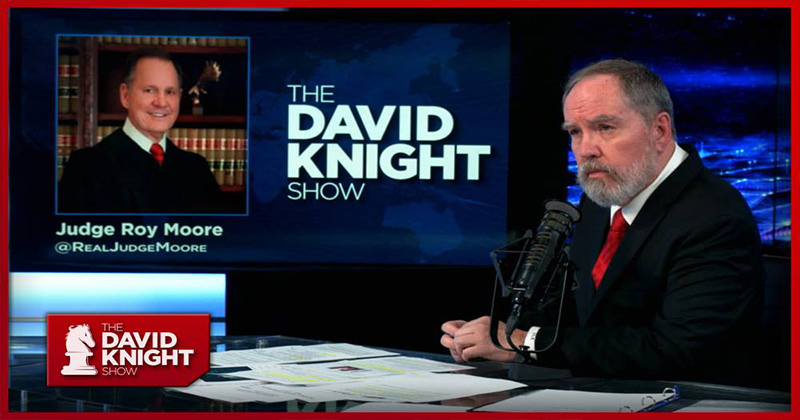 Judge Roy Moore, RoyMoore.org, joins The David Knight Show to talk about what Doug Jones & his Republican opponents for U.S. Senate have in common — a disregard for the Tenth Amendment and the separation of powers.

Judge Moore also weighs in on impeachment, federal marijuana prohibition, marriage, free exercise of religion and the basis of our laws.

The radical left understands how important monuments are, which is why they’re tearing them down EVERYWHERE nowadays.

Moore has been in a monumental struggle with the far-left for decades.

It’s a struggle for the foundation of our law, our society and our Constitution, and that’s bigger than 2.5 tons of a marble monument of the Ten Commandments.

However, the struggle is not just with the left, but the establishment, both Republican and Democrat, who act as if they’ve never read the 10th Amendment of the Constitution.

In explaining why he was the only U.S. Senate candidate at a Huntsville Republican forum this week who opposed federal regulation of marijuana, Judge Moore said, “I don’t think the federal government has any business in that area just like the federal government didn’t have any business in marriage and divorce. We’ve got to go back to the Constitution.”

In today’s interview on The David Knight Show, he went into more detail.

“And a lot of people don’t understand those last 4 words — ‘or to the people,’ in other words, there are some powers that neither the federal government nor the state government have,” he continued.

In referring to his opponents in the Alabama U.S. Senate primary, including former AG Jeff Sessions, Moore said, “My concern is not the Democrats, we know where they stand. And just like the Republicans, they follow the leadership. But my problem is with the Republicans because they don’t understand.”

Regarding the current impeachment process in Senate, Judge Moore said, “Trump has every right to form relationships. It’s in his power [as President]…[Democrats] are not going by the high crimes and misdemeanors provision of Article 2 Section 4. Clearly he [Trump] did not commit treason.”

In discussing DACA (Deferred Action on Childhood Arrivals), the order from Obama’s executive branch, Judge Moore said, “The job of the President is to enforce laws. Deferred action is, and always has been, illegal.”

Share this exclusive Infowars interview to join fellow patriots in the fight for free speech.