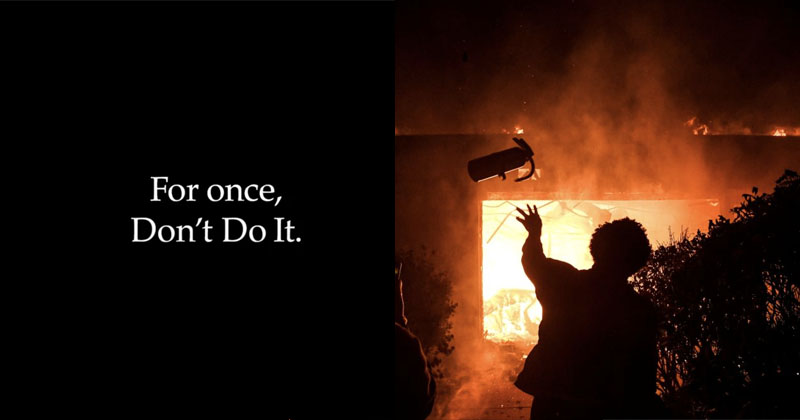 Nike have denounced racism by switching their slogan to support protests in the US over the death of George Floyd, a black man killed at the hands of police. Do we really need a multinational weighing in with more advertising?

As the White House is shut down, the Los Angeles freeway is halted and buildings burn in Minneapolis, it’s no wonder that Nike feels on safe ground to rapidly wheel out an emotive advert.

The last time the company responded to social uproar, creating a major campaign telling people to “sacrifice everything” to “believe in something,” it was around similar themes in 2018, when NFL quarterback Colin Kaepernick carried out a kneeling protest against police brutality.

Castigated by President Donald Trump and accused of disrespecting the American flag, Kaepernick’s actions proved divisive and put Nike at loggerheads with many.

The move clearly ended up being a cleverly calculated risk. Whichever side you looked at it from, one winner was clear: Nike laughed off ensuing boycotts to record a 5 percent stock increase in the year after it unveiled its message with Kaepernick, amounting to a $6 billion increase in overall value.

Nike has always positioned itself as a champion of wokeness, pouncing on any chance to share the spotlight with sportspeople courting controversy. Kaepernick had a Nike deal but had not been in an advert since 2011 before suddenly being appointed the face of ‘Just Do It’ billboards after taking his stand.

Since 1988, the sportswear giant has variously claimed to address ageism, sexism, homophobia, gender discrimination, inequality and a variety of other causes through glossy adverts and cinematography. The adverts always pack a dramatic punch – “don’t pretend there’s not a problem in America,” says their latest, while a piano softly plays in the background.

But the idea that Nike is working in a spirit of solidarity and selflessness on its platforms, which appeal to a core customer base largely made up of under-35s, is fanciful to say the least.

As one viewer put it: “Okay, that’s great that you made a minute long video but what are you doing to help? From a multi-billion dollar company, I feel like there should be a little bit more done besides some white text on a black background.”

Okay that's great that y'all made a minute long video but like…what are you doing to help?

As a multi-billion dollar company I feel like there should be a little bit more done besides some white text on a black background.

Money talks, and you can bet that the marketing executives and boardroom bosses who seem to have these commercials at their fingertips every time an opportunity arises would have thought twice had the financial slump of more than 3 percent they witnessed the day after launching the Kaepernick ad continued.

As it is, these campaigns more often than not produce enormous surges in profit. By the time Trump had warned they were getting “absolutely killed with anger and boycotts” over their involvement with Kaepernick, Nike had already seen online sales jump by 25 percent.

It’s a tried-and-tested trick: 32 years ago, an ad featuring shirtless octogenarian Walter Scott preceded revenues soaring from around $877 million to more than $1.2 billion. With such staggering financial incentives on the cards, you can understand why people might react with a little weary cynicism to being told to be “part of the change until we all win.”

“So we’re making ads about this now with the Nike symbol at the end?” one user asked on Twitter, adding: “If Nike actually was pushing for real change they would support bills for legislation to help end this systematic racism, not just put up ads.”

So we making ads about this now with the Nike symbol at the end smh. If Nike actually was pushing for real change they would support bills for legislation to help end this systematic racism; not just put up ads

There are certainly positive aspects to a brand with such ubiquitous influence turning its attentions to social causes: positing the Black Lives Matter campaign, some supporters backed Nike for speaking out and praising the “bravery” they had shown by risking alienating customers when they aligned themselves with the Kaepernick controversy

“They spoke proudly of losing hundreds of thousands of racist white followers,” pointed out one fan in a message of gratitude at a time of crisis in the US. “And yet again they’ve stepped up and publicly spoken out against the treatment of black people.”

Nike publicly supported @Kaepernick7 during his kneeling in the NFL. They spoke proudly of losing hundreds of thousands of racist white followers. And yet again they’ve stepped up and publicly spoken out against the treatment of black people 👏🏽 🙌🏽#BlackLivesMatter

Questions have also been raised by observers who pointed out that a company with a net income of more than $4 billion should not still be facing pressure to treat its own people properly and prove its social conscience beyond the glare of advertising banners.

Last year, a major report into ethics in clothing production concluded that Nike still has a long way to go to ensure that workers in its global supply chains earn enough to survive, calling on the company to commit to paying living wages for employees, many of whom are among the poorest in society and come from minority backgrounds.

Accusations of hypocrisy aside, perhaps it wouldn’t be a bad thing if more brands wanted to at least appear to speak out on societal issues. But adding a word to a slogan and sticking a series of sentiments on a screen is about as minimal a gamble as Nike could have made, given the riches their incursions into these kinds of issues have produced in the past.

For anyone fatigued by momentary marketing messages, it’s hard to ignore the reality that the result of these ads is record sales and ringing tills.