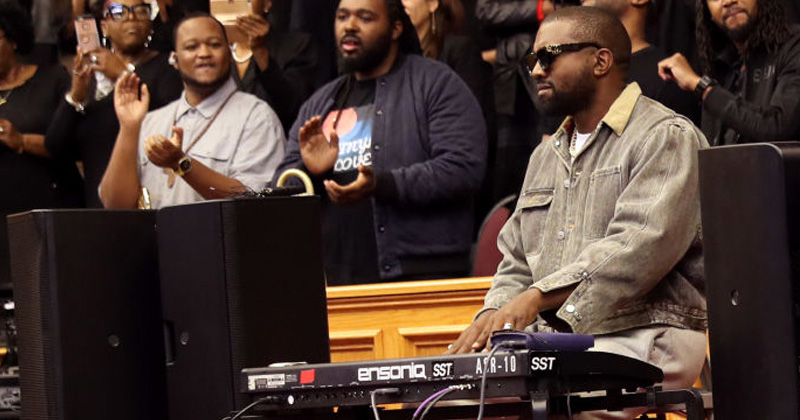 In a song titled, “Closed on Sundays,” set to appear on his upcoming gospel album Jesus is King: A Kanye West Experience, West mentions the Christian restaurant deemed homophobic by the left, saying, “Closed on Sunday, you my Chick-Fil-A.”

Here are lyrics from the song’s chorus:

“Closed on Sunday, you my Chick-Fil-A
Closed on Sunday, you my Chick-Fil-A
Hold the selfies, put the ’Gram away
Get your family, y’all hold hands and pray
When you got daughters, always keep ’em safe
Watch out for vipers, don’t let them indoctrinate…
Train your sons, raise them in the faith
To temptations, make sure they’re wide awake
Follow Jesus, listen and obey
No more livin’ for the culture, we nobody’s slave”

Here’s a bootleg recording of the song, recorded by an attendee of one of West’s Sunday sermons.

“This next ones called Closed on Sundays….just like Chik Fil A” – @kanyewest pic.twitter.com/oQeUeBWyAe

A representative from the LGBT advocacy group Collective Action for Safe Spaces claimed West’s song was a conscious effort to insult the gay community, especially in the age of Trump.

“Kanye’s lyrics here are an anti-LGBTQ stance with strategic timing,” reads a statement issued by the group’s director, Dana White. “We’re clear on where Chick-fil-A stands and where they put their money when it comes to the human and civil rights of LGBTQ folks. We’re clear that the Trump administration is currently targeting LGBTQ folks.”

Far-leftists have deemed Chick-fil-A an anti-LGBTQ restaurant due to its founder Dan Cathy’s support of traditional marriage, between a man and a woman. The restaurant maintains it does not discriminate against people “regardless of their belief, race, creed, sexual orientation or gender.”

Kanye has been conducting exclusive invitation-only, music-focused Sunday services in different places across the nation since January, and his latest gospel themed album was set to release last Friday, however it has yet to see distribution.

West was already under fire by the left over his enthusiastic support of US President Donald Trump, who has returned the favor by hosting him and his wife Kim Kardashian inside the Oval Office.

West was also criticized over his admiration of conservative commentator Candace Owens, of whom he commented, “I love the way Candace Owens thinks.”

The food site Delish reports Chick-fil-A did not respond to a request for comment.

Kanye West has been demonized by his detractors for his recent praise of Jesus Christ.