Appearing on the Jimmy Kimmel show, and facing a grilling over his support of President Trump, Kanye West declared Thursday that he refuses to be a prisoner to “monolithic thought.”

“[J]ust as a musician, African-American, guy out in Hollywood — all these different things, you know, everyone around me tried to pick my candidate for me,” West said.

“And then told me every time I said I liked Trump that I couldn’t say it out loud or my career would be over. I’d get kicked out of the black community because blacks — we’re supposed to have a monolithic thought, we can only like, we can only be Democrats and all. So, even when I said it right before I went to the hospital and I expressed myself, and when I came out I had lost my confidence,” the hip hop star explained.

West further explained that he refuses to repress his real self and succumb to fear.

“And I actually quite enjoy when people are mad at me about certain things.” West quipped.

When Kimmel attempted to push back and convince West that his support of Trump may be misplaced, even joking that the President might have made sexual advances toward his wife Kim Kardashian, the rap star refused to back down.

“Well he is a player” Kanye said, adding “When I see people even just like go at the president, it’s like why not try love?”

“For one person to stand up against all odds and just hug somebody the way that Alice Johnson hugged her family when she got out of jail, that one by one we can diffuse this nuclear bomb of hate we’re in as a society.” he added, referring to the woman who Kardashian helped Trump to pardon earlier this year.

“I think that’s a beautiful thought but just in literal terms, there are families being torn apart at the border of this country,” Kimmel said.

“There are literally families being torn apart as a result of what this president is doing, and I think that we cannot forget that whether we like his personality or not, his actions are really what matter.” the host added.

Kimmel also asked whether West believes Trump cares about black people or any people at all.

West wasn’t afforded the right to respond as the show went to a commercial break. 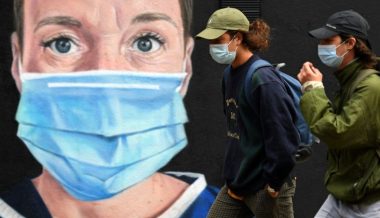