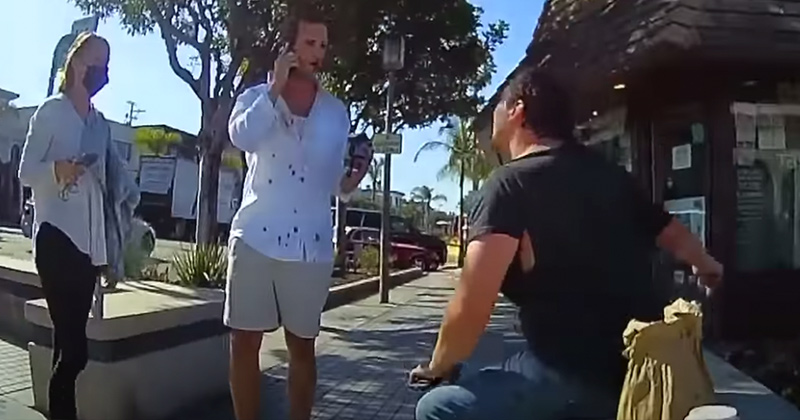 Footage captured in Manhattan Beach, California shows a young woman harassing two men for not wearing masks outside before tossing her hot coffee on them, prompting one of the guys to beat up her boyfriend in response.

“Y’all need to be wearing masks,” she sneered while walking by the two men.

One of the guys responded by asking, “How am I supposed to eat my burrito if I’m wearing a mask?”

An argument ensued until one of the men without a mask started yelling, “I didn’t say shit to you! Get the fuck out of my face!”

The young lady who started the argument, “Karen,” then called the guy a “little bitch” and threw her hot coffee on him.

After being burned by the steaming liquid, the man immediately stood up and ran towards the girl’s boyfriend, punching him in the face a few times before stopping and sitting back down.

After the scuffle, the boyfriend, who was left with a bloody nose, got on the phone with the police.

The group continued to argue because the couple couldn’t understand they assaulted the man first by throwing scorching coffee on him.

“You can’t throw coffee at people. You’re gonna show the cops coffee all over you because your stupid girlfriend threw it all over me you idiot,” the man who punched the boyfriend explained.

As the bloody boyfriend talked with police, he told them he was attacked by “random fuckin’ Trump supporters.”

This is what happens now when you try to eat a burrito while sitting outside in America.