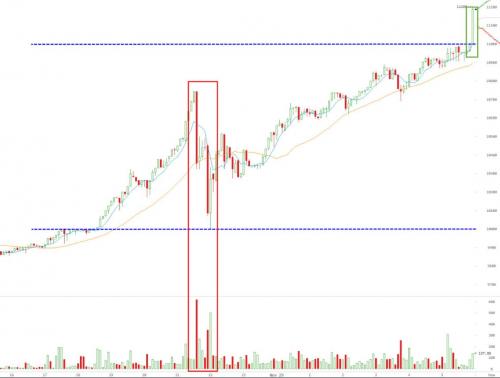 Popstar Katy Perry set crypto twitter aflame Tuesday when she posted a picture of her and investing legend Warren Buffett with the caption: “nbd asking Warren Buffet [sic] his thoughts on cryptocurrency.”

The post came shortly before bitcoin hit $11,000 as its inexorable march higher accelerated…

As we noted earlier, it’s been quite a year….

Buffett, of course, has been more than willing to share his views on the digital currency in the past, famously describing the bitcoin market as “a real bubble.”

As for Perry, her views on the subject are less widely known. The popstar earned $33 million last year, according to Forbes, and will likely build on that number in 2018, with endorsement deals inked for Procter & Gamble Co.-owned CoverGirl, Hennes & Mauritz-owned H&M and a gig on “American Idol.” In 2015, Perry was the third-highest-paid celebrity in the US with earnings of more than $100 million.