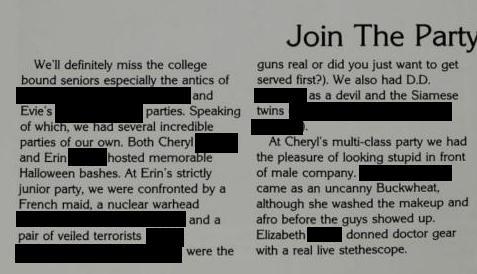 On top of openly admitting to drunken debauchery, one 1984 yearbook recently scrubbed from the web depicted a costume party where a woman wore blackface and dressed as Buckwheat from The Little Rascals – even as a black female also attended the school.

“At Cheryl’s multi-class party…[Redacted name] came as an uncanny Buckwheat, although she washed the makeup and afro off before the guys showed up,” one passage reads.

Commenting on the school’s apparent approval of casual racism, the Cult of the First Amendment blog which archived the yearbooks, noted the lax attitude over blackface costumes exemplified the student body’s “privileged attitude.”

“Seeing such insensitive racism in action at this prestigious girls academy, attended by mostly white rich girls, provides context of the very privileged attitude exhibited by the Holton-Arms all female student body. That the Holton girls got these yearbooks approved by faculty and paid for by their parents shows just how powerful they were in their own right at such a young age,” notes the Cult of the First Amendment Blog.

In another account detailed in the same yearbook, two girls came to a party dressed as “veiled terrorists,” wearing full burqas and carrying guns.

“We were confronted by…a pair of veiled terrorists, [two redacted names], were the guns real or did you just want to get served first?” the yearbook reads, showing a picture of two women in Muslim-like attire.

Another Holton-Arms yearbook from 1982, when Blasey would have been a sophomore, also includes an off-color “Hiel Hitler” joke.

Following a Heavy.com article published on Sept. 17 covering Blasey Ford’s high school years, several yearbooks were deleted from the internet containing salacious details about the elitist WASP culture at Holton-Arms where binge drinking and “pass-out” parties were the norm.

It’s important to note that while extensive attention has been paid to the high school years of Supreme Court nominee Brett Kavanaugh, the media has thus far failed to cover these pertinent facts surrounding Blasey’s high school years, where a culture of drunken “multiple all night benders” and alcohol-induced amnesia, not to mention casual racism, appeared to be the norm.

Why were the yearbooks scrubbed?