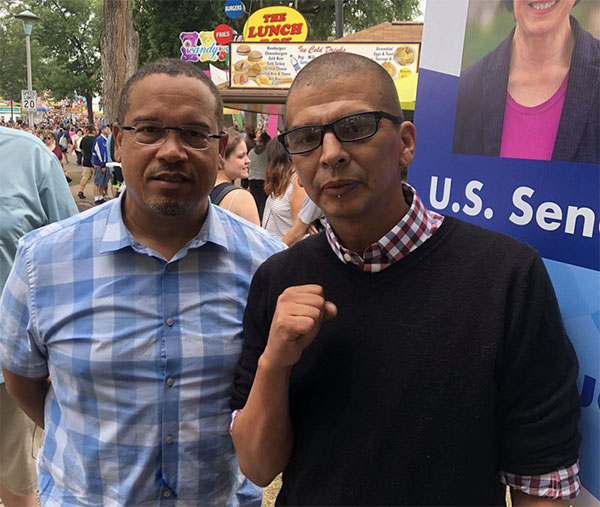 On the heels of an unprecedented Minneapolis Police press conference this week in which officers warned citizens to not vote for Keith Ellison, photographs obtained by Big League Politics contributor Laura Loomer show Ellison and Luis Enrique Marquez, a notorious leader of the Portland ANTIFA who has a criminal record and has carried the Communist flag.

Ellison’s support of ANTIFA is no secret, but as a candidate for Attorney General, his relationship with a violent member of ANTIFA, which has been designated as a domestic terrorist organization by the US Department of State, is concerning.

As a result of his criminal actions as the leader of Portland ANTIFA, Luis Enrique Marquez was booked into the Multonomah County Jail and Conditionally released June 30, 2018 having been charged with two counts of theft (one 2nd degree and one 3rd degree) and 3rd degree assault per Jail Employee ID 93275.

Luis Enrique Marquez was one of those nine people arrested in what police described as violent protests. 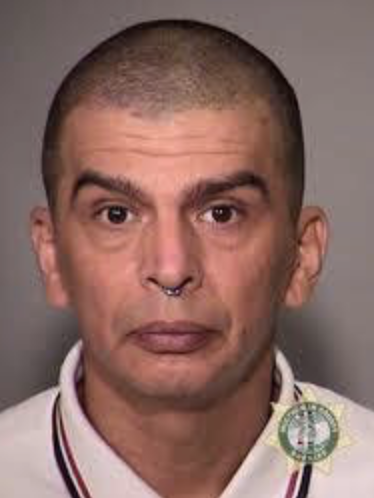 Luis Enrique Marquez not only has a history of arrests, but he is the subject of several YouTube videos which display his ANTIFA associations and violent behavior. Again, this is who Keith Ellison was spotted hanging out with at the Minnesota State Fair. Sources who wish to remain anonymous for the sake of their safety told Big League Politics that Ellison spent over an hour with Luis Enrique Marquez, whose next court date is scheduled for November 28, 2018 according to Multonomah Court employee Anthony Tran.

Along with being a six-term lawmaker who represents Minnesota’s 5th District, Ellison is the first Muslim to ever be elected to the U.S. Congress, and has served as the Deputy Chair of the Democratic National Committee since 2017. When he was sworn into office, Ellison refused to be sworn in with a Bible, and instead demanded that a Quran be used as a way to emphasize “religious tolerance.”

It is unclear how Ellison, who has himself called for violent riots composed of Islamists and ANTIFA to “stop Trump” is in any way whatsoever qualified to be Minnesota’s Attorney General.

ANTIFA, which has been classified by the U.S. Department of Homeland Security as a Left wing domestic terrorist organization, is often present at those rallies Ellison and his DNC colleagues have called for and organized. There are countless instances, many of which have been caught on camera, of ANTIFA members violently assaulting Trump supporters and journalists in public. In 2017, it was also revealed that the FBI has been investigating members of ANTIFA who they say have been traveling to the Middle East to train with ISIS in an effort to plan for the destruction of President Trump.

Despite being classified as a terrorist organization, Ellison tweeted a picture of himself posing with the official ANTIFA handbook, saying, “At @MoonPalaceBooks and I just found the book that strike fear in the heart of @realDonaldTrump.”

Combined with his refusal to take his oath on a US Constitution, along with his personal associations with ANTIFA, Ellison ought to be disqualified from the Attorney General race, as it is entirely unsafe and unreasonable for Minnesota’s top cop to have personal ties to members of both domestic and foreign terrorist organizations. Along with his support of domestic ANTIFA terrorists, Ellison is also tied associated with Linda Sarsour and Louis Farakkhan.

What a lot of people don’t know about KEITH Ellison:

– Ellison was an active supporter and local LEADER of the Nation of Islam before his election to Congress.

– Ellison first sought office as Democrat in 1998 as Ellison-Muhammad, a self-avowed member of the Nation of Islam (This is just one of three known Nation of Islam names Ellison has used over time).

– In 1992, Minneapolis Police Officer Jerry Haaf was executed at the Pizza Shack by four members of the Vice Lords Gang. The gang’s leader, Sherif Willis, was shown to have been involved in the planning of the murder, but he was never charged because police said they lacked sufficient evidence. At the time, Ellison was a Minneapolis attorney in private practice. Willis was a convicted murderer who ran a gang front called United for Peace. Following this public execution, within a month of Haaf’s murder, Ellison stood shoulder to shoulder with Willis, going so far as to participate in the organization of a gang demonstration against police. Months later, Ellison spoke at another demonstration in support of one of Haaf’s killers.

– In October, 1992, Ellison helped organize a United for Peace demonstration against the Minneapolis Police. Ellison stated, “The main point of our rally is to support United for Peace in its fight against the campaign of slander the police federation has been waging.”

Ellison publicly supported the Haaf murder defendants. In February, 1993, he spoke at a demonstration for one of the defendants during their trial, leading them in chanting, “We don’t get no justice, you don’t get no peace,” which is almost word for word what the modern day Black Lives Matter movement chants at their demonstrations.

In 2000 Ellison spoke at a fundraiser for Symbionese Liberation Army (SLA) member Kathleen Soliah, who had been a fugitive on the run from justice for 25 years, on charges of attempting to bomb L.A. police officers in 1975. In his National Lawyers Guild speech, Ellison had kind words of support for cop killers Mumia Abu-Jamal and “Assata Shakur” aka Joanne Chesimard, who was wanted for the murder of New Jersey State Trooper Werner Foerster in 1973.

As if all of this evidence backed up by actual photographs ins’t enough to make one see how unfit Ellison is for serving as Minnesota Attorney General, Luis Enrique Marquez, who was reported to have spent a lengthy amount of time hanging out with Ellison at the Minnesota State Fair was also pictured waving a communist hammer and sickle flag. Under communism, more than 100 Million people have been killed as a result of famine and political violence.

Minnesota voters will decide on Tuesday November 6, 2018 at the polls whether or not they want to elect Doug Wardlow, a man of law and order, or Keith Ellison, a radical Leftist who has been accused of beating women and has been photographed palling around with known jihadis, anti-Semites, and domestic ANTIFA terrorists.

On Friday, the Minneapolis Police Union held a press conference where they endorsed Doug Wardlow, and warned voters not to vote for Keith Ellison.