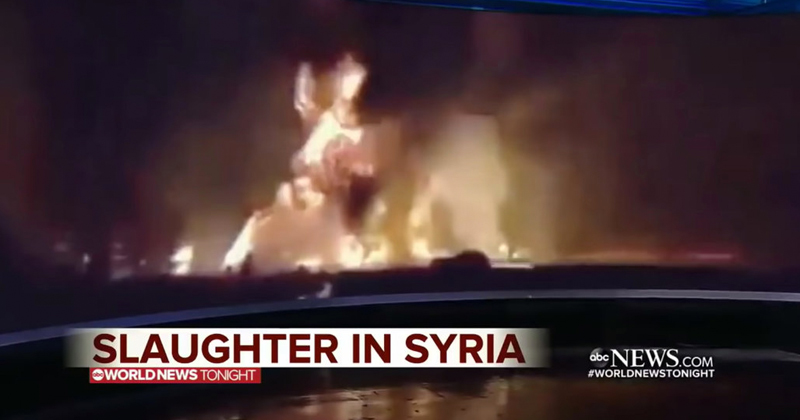 A gun range in Kentucky has confirmed video promoted by ABC News as Syrian combat footage actually came from their firing range.

On Wednesday, the Knob Creek Gun Range in Bullitt County confirmed a video circulated by ABC News on its “Good Morning America” and “World News Tonight” programs early in the week was footage from an event that takes place at the firing range twice a year.

“Yes this is a video that was taken at the Machine Gun Shoot and Military Gun Show that happens twice a year at Knob Creek Gun Range,” gun range manager Gina Carnell told The Daily Caller News Foundation.

“If you look at the footage in this video that was taken by someone on the bleachers at Knob Creek you can see the spectators with their phones videoing, and you can see our range.”

“We can tell this was taken here,” she added.

According to a video tweeted out by President Trump, the footage was promoted on several other programs in addition to the two aforementioned shows.

On Monday, after the video was exposed as a hoax on the web, World News Tonight issued a correction on the video claiming there were “questions raised about its accuracy.”

CORRECTION: We’ve taken down video that aired on “World News Tonight" Sunday and “Good Morning America” this morning that appeared to be from the Syrian border immediately after questions were raised about its accuracy. ABC News regrets the error.

But during a Wednesday press conference alongside Italian President Sergio Mattarella, Trump hammered an ABC reporter on the fake footage.

“I didn’t give them a green light,” Trump said to ABC reporter Jonathan Karl, referring to Turkey. “And when you ask a question like that – it’s very deceptive, Jon. Almost as deceptive as you showing all of the bombings taking place in Syria and it turned out that the bombing you showed on television took place in Kentucky.”

President @realDonaldTrump slams @ABC News for showing video from a gun range in Kentucky that they passed off as from the conflict in Syria. pic.twitter.com/iIXJhYBFSY

“I’m not even sure that ABC even apologized for that but certainly it was a terrible thing,” he said. “I’m looking at this and saying ‘wow that’s pretty bad,’ and it was in Kentucky. It wasn’t in Syria. So I don’t know what you’re going to do about that, but I think ABC owes an apology.”