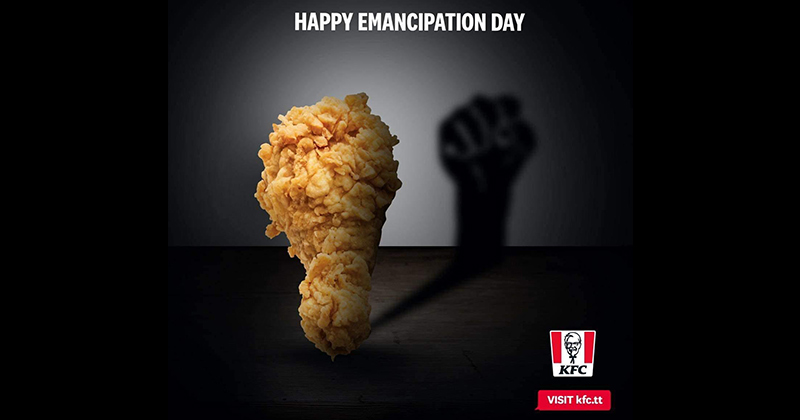 KFC Trinidad and Tobago posted a picture of a fried chicken drumstick casting a shadow of the black liberation fist in the background to confer support for “emancipation” as the Black Lives Matter movement continues to enjoy international backing across the Western world and beyond.

The post, given its tone deaf message, was taken down from the corporation’s Instagram page, as the world-renowned fried chicken restaurant chain partook in the Emancipation Day celebrations held in the Caribbean country every August 1.

After social media users laid into the post, KFC TT issued a retraction and an apology for the original advertisement.

“At KFC Trinidad, we always strive to recognize our nation’s multicultural history and make up, and to play our part in recognizing it,” the chicken restaurant explains.

The statement continues, “Our intention was to support and recognize the importance of this historically significant event. We recognize that our posts commemorating Emancipation Day drew some negative responses. Clearly, we got it all wrong and we want to unreservedly apologize for the offense caused.”

“As a result, we are reviewing the approval process of all of our communications to avoid situations like this reoccurring,” the statement concludes.

It was on Instagram in case you’re wondering why the URL doesn’t work. It’s an IG account for KFC in Trinidad and Tobago. pic.twitter.com/p07yT7GPYI

As social media users dogpiled on the deleted message, which began to go viral on Twitter, one person joked, referring to other stereotypes, tweeting: “You may as well have included a watermelon and grape soda with that chicken.”

You may as well have included a watermelon and grape soda with that chicken, @kfc.

On Instagram, most of the replies to the issued apologize were supportive of KFC’s message and failed to understand why some many commenters had initially taken offense to the original post.

“If you say thank you someone gets offended these days. Can’t blink without someone saying they were hurt. It is absolutely ridiculous,” remarked one Instagrammer.

Another person commented: “I honestly found the post creative… so I’m either missing the issue or it was blown out of proportion.”

Trinidad and Tobago was the first country in the world to nominate a public holiday to celebrate the abolition of slavery in 1985, replacing Columbus Discovery Day. Several other Caribbean countries followed suit in celebrating Emancipation Day after Trinidad and Tobaco, an island nation north of Venezuela, adopted the public holiday.