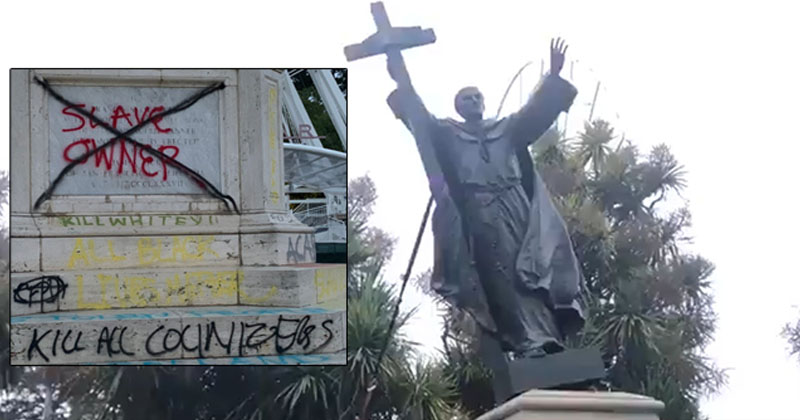 Tonight Antifa and Black Live Matter protesters managed to pull down the statue of Albert Pike, an Officer in the Confederate Army. It was D.C,'s only Confederate statue.

Here is the face of the toppled statue of Confederate general Alfred Pike in DC. @wusa9 #Juneteenth pic.twitter.com/j9iwAqGVgJ

They have now lit the toppled statue on fire pic.twitter.com/53nrC4G72u

BREAKING 🚨: ALBERT PIKE STATUE TORN DOWN. Protesters converged on Judiciarw Square in the District to tear down this stature of a confederate general @fox5dc pic.twitter.com/CHXucC4Gzi

Never lose sight of the fact this is all being done with explicit government approval and only Americans stepping up to try and stop this lawlessness are being arrested and prosecuted.

The D.C. Police are not doing their job as they watch a statue be ripped down & burn. These people should be immediately arrested. A disgrace to our Country! @MayorBowser

#BREAKING: Demonstrators topple statues in San Francisco's Golden Gate Park. @hurd_hurd will have details on our News at 11. https://t.co/RvmlMqu73s pic.twitter.com/iUZE28AvdD

“KILL WHITEY” and “KILL ALL COCLINIZERS [sic]” was spray-painted on the statue of Francis Scott Key in Golden Gate Park.

A Confederate statue is down in #Raleigh pic.twitter.com/0FCXkocD4Q

Here’s the second oneS pic.twitter.com/fmfOLlFNWx

The statue in Raleigh was “lynched”:

This is the statue’s new post for right now. pic.twitter.com/sfoN7cJuMO

Antifa rioters on Sandy Blvd. in Portland draped a US flag over a George Washington statue & set it on fire. They then toppled the statue. “Genocidal colonist” & “f— cops” are sprayed on monument. Rioters have began to build another autonomous zone nearby. pic.twitter.com/TrZkhPK9zp

Portland wakes up to see what antifa did overnight. A century old statue of George Washington was toppled & set on fire with an American flag. “White fragility,” “Damn white men” & other messages are written on the moment. On the ground nearby: “Defund white men.” pic.twitter.com/zjrsZHJC9o

The foundation of America is under attack by a well-organized neo-Marxist insurgency, and Republican leaders are no where to be found. It’s difficult to understate the scale of this betrayal. Pathetic.

Of course they despise Washington. Notice the graffiti “1619” on the toppled statue. And the burnt flags. The NYT must be proud. They taught these people well. https://t.co/4JTPEv2KMd

George Washington statue in Portland will be removed by crane TODAY and put in storage. No long term decisions made regarding reinstallation.

Remember how Trump said after Charlottesville that next they’d be tearing down statues of George Washington and Thomas Jefferson and the GOP laughed at him and threw him and their own voters under the bus?

As Tucker Carlson noted in his show Friday night, the GOP is a group of feckless cowards who have surrendered to the mob.

Owen and Dan Lyman discuss how the left’s cultural revolution in the US has spread to different countries in Europe.