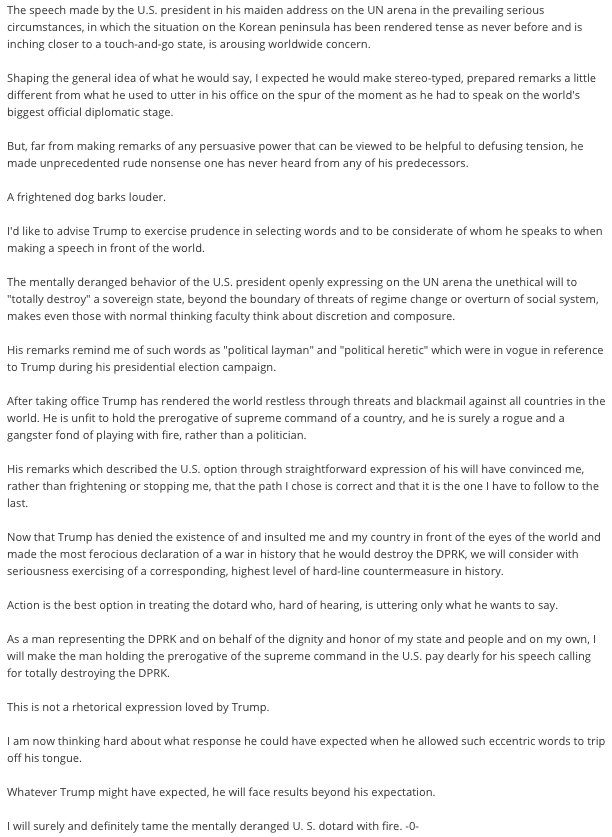 North Korean leader Kim Jong-un has threatened U.S. President Donald Trump with “fire” in response to the president’s speech at the United Nations (U.N.) this week.

In a rare, televised speech Friday, Kim labeled the maiden U.N. address as “rude nonsense” and accused Trump of being “mentally deranged” for threatening to destroy North Korea.

“The mentally deranged behavior of the U.S. president openly expressing on the UN arena the unethical will to ‘totally destroy’ a sovereign state, beyond the boundary of threats of regime change or overturn of social system, makes even those with normal thinking faculty think about discretion and composure,” Kim said, according to state-run media outlet Korean Central News Agency (KCNA).

Kim, who also called the president “a rogue and a gangster,” stated that Trump’s threats against Pyongyang legitimize the North Korean pursuit of advanced nuclear weapons.

“His remarks which described the U.S. option through straightforward expression of his will have convinced me, rather than frightening or stopping me, that the path I chose is correct and that it is the one I have to follow to the last,” Kim added.

“Now that Trump has denied the existence of and insulted me and my country in front of the eyes of the world and made the most ferocious declaration of a war in history that he would destroy the DPRK, we will consider with seriousness exercising of a corresponding, highest level of hard-line countermeasure in history.”

The North Korean leader ended his speech by threatening to “tame” Trump with “fire.”

“I will surely and definitely tame the mentally deranged U.S. dotard with fire,” Kim said.

Trump on Tuesday stated the U.S. would “totally destroy” North Korea if Pyongyang placed “ourselves or our allies” in danger.

“The US has great strength and patience,” Trump said. “If it is forced to defend ourselves or our allies, we will have no choice but to totally destroy North Korea.”