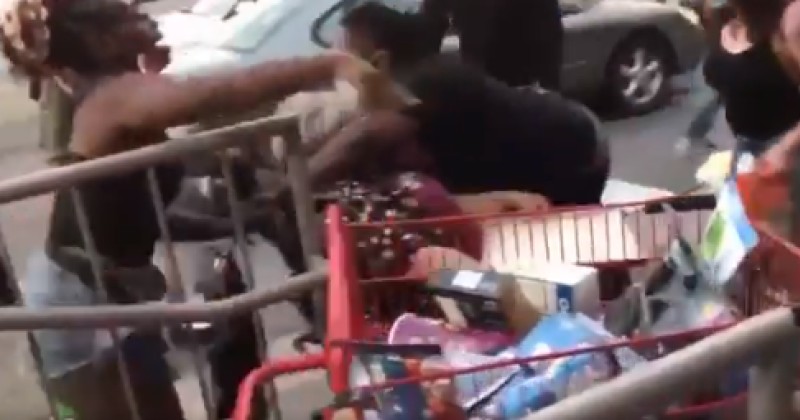 A white woman in a wheelchair carrying a knife who tried to stop looting was attacked during the riot in Minneapolis last night, becoming one of the more bizarre faces of the chaos.

Video footage shows the woman, described as “elderly” but believed to be in her 30’s, blocking the door of a Target store as looters try to drag her away.

Elderly Resident tried to stop the rioters from looting Target in Minnesota pic.twitter.com/YSWjsW5VZI

The woman is then pelted with more objects as the crowd cheers.

Photos do indeed show that the woman was waving around a knife. Whether this was in self defense or proof that she was trying to stab others is open to interpretation.

Another clip shows an African-American male trying to grab the woman by the head.

Video captured earlier of the elderly wheelchair-bound woman who was attacked at the Minneapolis Target during the BLM riot. In a later interview, she said she was trying to do her part in stopping the looting. She was beat on the head & sprayed in the face w/a fire extinguisher. pic.twitter.com/EpcAAF0HLY

“I was peacefully protesting and trying to block the way so they couldn’t loot the Target – I didn’t stab anybody,” the woman subsequently claimed.

“They attacked me from front and back, they punched me in the mouth, I got punched in the head several times, I got grabbed from behind, people grabbed my wheelchair, they stole my keys, they stole everything they could off of me,” she added.

Numerous stores and businesses were targeted during the violent unrest, including McDonalds, AutoZone, Dollar Tree, Wendy’s and an affordable housing block under construction that was burned to the ground.