It’s no wonder that Monsanto is trying to fight “rumors” that its pesticide products are causing serious health damage to unborn children and to people of all ages. Glyphosate, the main ingredient in Roundup, has been named the most widely used herbicide in history.

A paper recently published in the peer-reviewed journal Environmental Sciences Europe states that 18.9 billion pounds (8.6 billion kilograms) of glyphosate have been used globally. The herbicide’s use has risen almost 15-fold since the introduction of so-called “Roundup Ready” genetically engineered crops in the 90’s.

Enough glyphosate was applied in 2014 to cover every harvested acre of cropland worldwide several times over, with estimates of its use coming in at (minimally) 0.53 kilogram/hectare. This makes glyphosate the most commonly used and widely sprayed herbicide in history.

The author of the paper, Charles Benbrook, Ph.D., states:

“The dramatic and rapid growth in overall use of glyphosate will likely contribute to a host of adverse environmental and public health consequences.”

Here are the study results from the abstract:

Accurate pesticide use data are essential when studying the environmental and public health impacts of pesticide use. Since the mid-1990s, significant changes have occurred in when and how glyphosate herbicides are applied, and there has been a dramatic increase in the total volume applied.

Two-thirds of the total volume of glyphosate applied in the U.S. from 1974 to 2014 has been sprayed in just the last 10 years. The corresponding share globally is 72 %. In 2014, farmers sprayed enough glyphosate to apply ~1.0 kg/ha (0.8 pound/acre) on every hectare of U.S.-cultivated cropland and nearly 0.53 kg/ha (0.47 pounds/acre) on all cropland worldwide.

Genetically engineered herbicide-tolerant crops now account for about 56 % of global glyphosate use. In the U.S., no pesticide has come remotely close to such intensive and widespread use. This is likely the case globally, but published global pesticide use data are sparse.

Glyphosate will likely remain the most widely applied pesticide worldwide for years to come, and interest will grow in quantifying ecological and human health impacts. Accurate, accessible time-series data on glyphosate use will accelerate research progress.” 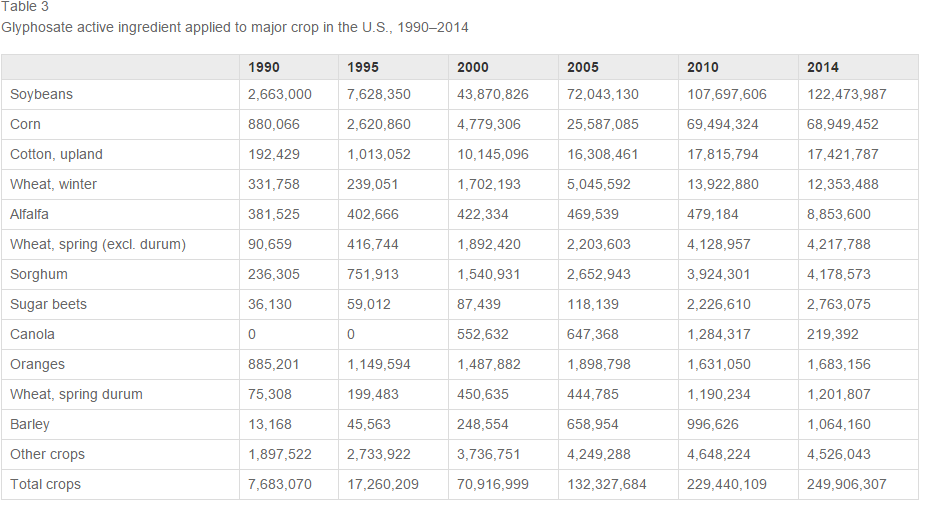 Monsanto clearly doesn’t want its product, so widely in use, to be named as ‘probably carcinogenic’ or an ‘endocrine disruptor’ as so many scientific studies suggest. Mounting evidence and alarm bells are being sounded around the globe that this toxic chemical brew, Roundup, is killing our pollinators, causing serious health damage, yet still being sprayed heavily. The Big Ag company has billions to lose if its mainstay is no longer a best seller.

Dr. Benbrook cautions that many studies have linked exposure to glyphosate with degeneration of the liver and kidney. When given at high doses, glyphosate has also been linked to non-Hodgkin’s lymphoma in animal tests.

Opposing his arguments are agencies like the Environmental Protection Agency, which suggests that it is impossible to get realistic exposure past the No Effect Level in humans, except by using gavage (direct dosing) and surfactants. Such gavage has been performed in laboratory rats and basically amounts to sticking a tube of pesticide directly into the stomach to increase uptake.

Others join Benbrook in his warning, stating that glyphosate exposure is much higher and much more dangerous than any government agencies have disclosed. The FDA now may even test for glyphosate in food, a move that is long overdue.