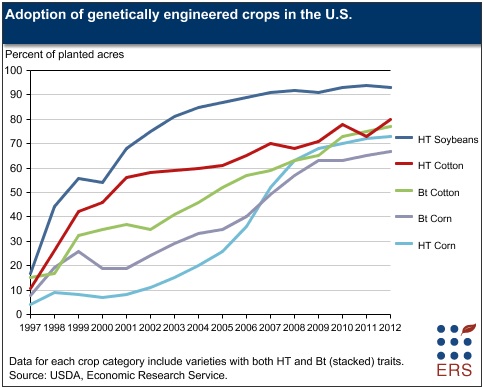 Beekeepers have instinctively known this all along, but a new landmark study has linked insecticide dust to damaged beehives. This is a sad but welcome confirmation of what beekeepers in Minnesota have been trying to tell the world for years now.

In the first test of a breakthrough environmental law, Minnesota has compensated two beekeepers whose hives were severely damaged last spring by toxic dust that drifted off the fields of a neighbor planting GM corn. Neonicotinoids were to blame. Though they are the most widely used class of pesticides, the combination of agricultural chemicals is what is really causing havoc for the bees.

Specifically, clothianidin, which is used as a coating on most of the corn and soybean seeds used in American agriculture, has caused extreme loss in the Midwest. It is absorbed into plants as they grow, affecting even the pollen once it is mature.

Beekeepers are distressed, sometimes with over 1000 hives to tend to and the continual decline of their bee colonies. A missing combination of milkweed, clover, and other wildflowers, along with the liberal use of pesticides and various diseases have left even the most seasoned beekeepers in turmoil. This act of compensating beekeepers is a huge win for an industry that has been fighting the chemical giants for years on the subject of colony collapse disorder.

As one beekeeper named Ellis, in Barrett Minnesota, told the Star Tribune:

“This is supposed to be the land of milk and honey.”

Sadly, it is more like the land of Monsanto’s killer chemicals, and the products from other Big Ag companies who have sold farmers and gardeners alike on the notion that pesticides and herbicides are needed to fight pests and weeds. Instead, all that is likely needed is more biodiversity and better soil, but these claims seem to fall on deaf ears unless you are a beekeeper. Ellis lost 1,200 of his 2,200 hives last year.

He isn’t alone. Most Midwestern crops are now genetically engineered to withstand Roundup herbicide, so farmers can kill weeds efficiently without harming their yields, a major advance in productivity that was supposed to revolutionize agriculture. Unfortunately, these claims have not been proven, and have often been debunked instead. Meanwhile weeds have grown resistant to the herbicides unleashed on the land.

Sen. Rick Hansen, who sponsored the 2014 law that created the compensation system, said:

“This is the first action of any state, a finding of fact, that neonicotinoids are harmful to bees. Once you have a state compensating people for a loss, it’s real.”

Kristy Allen, founder of Minneapolis honey company, Beez Kneez, fought for the compensation law and testified before the legislature. Being one of the first beekeepers to collect damages from it, she says, “is an irony that kills me.”

“The fact that MDA is compensating me for something that is not illegal is crazy to me,” she said. “It means something is broken.”