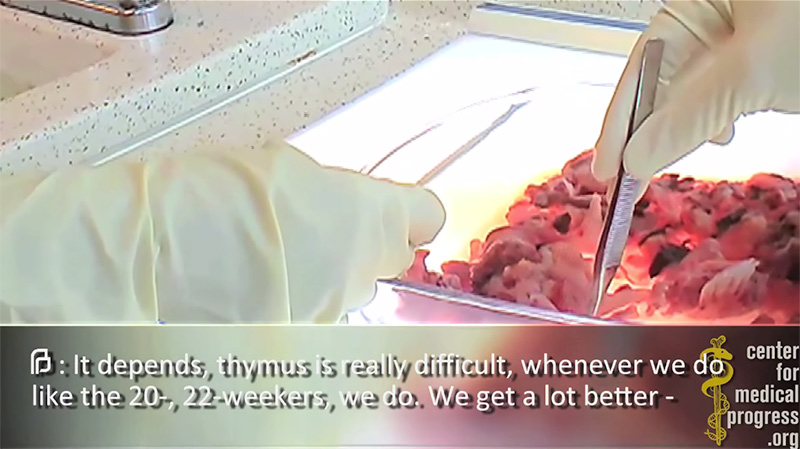 In the latest installment of their Human Capital exposé on Planned Parenthood’s reported sale of aborted baby body parts for profit, a former tissue procurement technician explains how she approached pregnant mothers at Planned Parenthood clinics and asked them to sign over their unborn baby’s blood, tissue and organs, often before patients had agreed to an abortion.

“I would wait for certain girls to come in, I would look for an opportunity to [obtain] consent – so that would mean after they go in, they get registered with the nurse, they sit down – that would be a great opportunity for me to… ‘Hey can I talk to you for a second?’” technician Holly O’Donnell, a former StemExpress technician, recalled to filmmakers.

“It’s not an option, it’s a demand,” O’Donnell says were her supervisor’s instructions.

The former technician claims that while the companies gave the appearance of formally requesting permission, consent was sometimes treated as an afterthought.

“If there was a higher gestation, and the technicians needed it, there were times when they would just take what they wanted. And these mothers don’t know. And there’s no way they would know.”

Consent form checklists, which in addition to denying reimbursement, feature an item stating, “Before I was shown this consent, I had already decided to have an abortion and signed a consent form for it.”

The Center for Medical Progress says the video exhibits Planned Parenthood and its affiliates’ callous disregard for the safety of women and human life in general.

“Experiences like Holly O’Donnell’s show that Planned Parenthood’s abortion and baby parts business is not a safe place where vulnerable women can be cared for, but a harvesting ground for saleable human ‘product,’” a statement from CMP Project Lead David Daleiden reads.

The group is currently in the process of releasing a series of undercover videos which they hope will urge the American public to demand taxpayer dollars stop being pumped into the “barbaric abortion business,” and prompt lawmakers to conduct an investigation “to determine the full extent of Planned Parenthood’s offensive practices and hold them accountable to the law.”

Previous videos have shown various Planned Parenthood administrators explicitly discussing the sale of fetal tissue and intact fetuses for profit, in addition to graphic depictions of fetal organ and limb dissection and what can only be described as a refrigerated dish full of dead baby body parts.

Planned Parenthood in the meantime has enlisted a “progressive” Washington DC public relations firm to assist with damage control, and branches in several states have gone as far as to demand local media not air the damning footage obtained through the Center for Medical Progress’s undercover sting.

On Monday, a Los Angeles County judge “denied the Center for Medical Progress’s motion to dissolve a temporary restraining order awarded to StemExpress on July 28,” according to the Stem Express website.