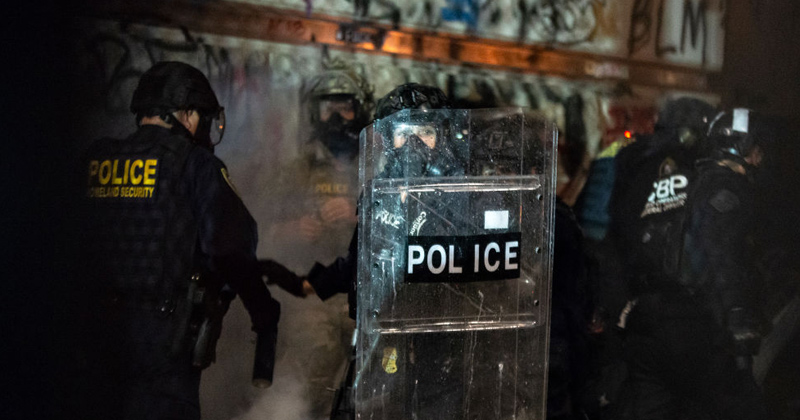 (Natural News) At least 38 law enforcement officers who have been responding strongly to the endless rioting in Portland have been doxed, according to Richard Cline, the deputy director of the Federal Protective Service (FPS).

Doxing is a cyber attack that involves the release of an individual’s personal and private information over the internet. What is leaked during these attacks can vary, but they usually include a person’s full name, home address, cell phone number and even his social security number and credit card information.

The extent of what information regarding the 38 officers was released has not been made clear, but Cline said that federal agents working in Portland have now been ordered to hide their names, which are usually displayed on their uniforms, to reduce the risk of future doxing attacks. Cline also said that, from now on, the officers will instead be displaying their badge numbers. This allows them to be identified, but only internally.

Other law enforcement departments in Portland have also started hiding the identities of their officers. The Portland Police Bureau (PPB) began the practice in June, when former chief of police Jami Resch authorized the police officers to cover their names on their uniforms with tape.

Demonstrators reacted to this decision at the time negatively by saying that this makes it difficult for Portlanders to hold their officers accountable, especially when they want to file complaints about police actions such as police brutality.

At the time, spokeswoman for the PPB Terri Wallo-Strauss told Oregon Public Broadcasting that Resch’s decision was informed by the doxing of several officers, emphasizing that their safety and the safety of their families was of the utmost importance.

Listen to this episode of the Health Ranger Report, a podcast by Mike Adams, the Health Ranger, as he talks about how communist China has been providing the Black Lives Matter movement with weaponized drones that can kill people with aerosolized fentanyl. They may use these weapons to try and kill President Donald Trump.

Antifa has history of terrorizing law enforcement through doxing

The Department of Homeland Security (DHS), which has federal officers in Portland, has previously stated that “violent anarchists,” most likely a reference to Antifa, have previously released personal and private information about federal agents on multiple occasions.

According to DHS officials, federal officers in Portland are identifiable through their status as law enforcement agents as well as members of the specific agency that they represent.

The acting commissioner of Customs and Border Patrol (CBP), Mark Morgan, said that the repeated doxing attacks are putting not just the officers in danger, but their families as well. This is why the name tags of their officers in Portland have now been replaced with personal identifiers so that they can all identify each other easily, but the Antifa rioters that they have to battle every night will not. (Related: Federal agents stand off with rioters in Portland who lit fires and tried to break into the Federal Courthouse.)

Some of the doxing attacks against CBP officers in Portland include publicizing their home addresses, with messages that threateningly suggest that the officers should go home instead of trying to fight back against the rioters.

“So yes, as acting commissioner, I have authorized and supported removing their names from their uniforms,” said Morgan.

A previous report published by the DHS in June even warned their officers that their personal information is in danger of being leaked through social media websites, especially if they have participated in protecting people’s lives and property during the nationwide rioting and civil unrest.

“While doxing does not in and of itself constitute a threat to law enforcement and their families, doxing might result in the downstream threat of violence by violent opportunists or domestic violent extremists (DVEs), or otherwise prevent DHS personnel or law enforcement partners from executing their lawful mission,” said the report.

The local and federal officers in Portland are not alone in being doxed. Reports show that law enforcement agencies in Washington, D.C., New York City, Kentucky, Boston and Atlanta have all had some of their officers’ personal information leaked to the public through social media.

Law enforcement not alone in getting doxed by Antifa

Mason Lake, a photographer who had been covering the riots in Portland, was threatened by Antifa militants through social media. Some of the primary instigators even used the opportunity to dox him by publishing the address to his home as well as his phone number.

“Give him a call and let him know how you feel about him keeping a file of [Black Bloc] folks that he turns over to pigs,” one person wrote online after publishing Lake’s phone number. “What’s that saying, snitches get…”

Upon seeing him taking pictures of rioters at one demonstration, members of Antifa quickly began physically assaulting him. He took at least a dozen hits to the head during this altercation.

Antifa black bloc militant beats up BLM supporting photographer @MasonLakePhoto. Mason Lake was accused of communicating with Portland Police and a bounty had been put on him on social media by #antifa. #PortlandRiots pic.twitter.com/pwvtWMpUeC

Antifa has made their hostility to Lake well known despite the fact that the photojournalist has made his support for the Black Lives Matter movement known. In fact, he has blamed the incident on federal officers for stoking divisions between members of Antifa and BLM.

“The feds are taking us journalists out one by one with any means at their disposal,” Lake wrote on his social media page.

“Why are they trying to eliminate the media?” Lake further wrote. “What do they have to hide? It is war crimes. Pure and simple, they are trying to hide their war crimes against Portland citizens by censoring the press.”

Stay updated on what Antifa is doing in Portland and all over the country to try and get police departments everywhere abolished at AntifaWatch.news.

California pastor refuses to comply. “If we do not take a stand and say ‘You have gone far enough,’ we’ll be having this same conversation in six weeks, six months and even a year from now.”