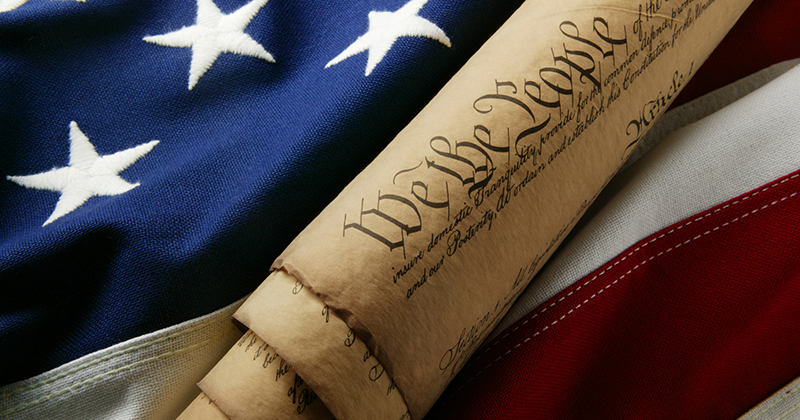 A law professor at the University of Texas-Austin has called for the US Constitution to be ‘updated’, claiming that it has ‘racist words’ and that it is written in ‘gendered language’.

Writing in The Hill this week, Richard Albert stated that the document’s “gendered and racist words stand in the way of true reconciliation in this divided country and have no place in any modern society.”

I explain in this new oped why it is time to update the language of the US Constitution: "Its gendered and racist words stand in the way of true reconciliation in this divided country and have no place in any modern society." https://t.co/rqrD6wIhei

“The Constitution is replete with obsolete and outdated language that weakens rather than enhances the feeling of belonging that a constitution should generate among a country’s citizens,” the professor proclaims.

The ‘racist’ part of the Constitution, Albert claims, comes in the 13th Amendment, despite the fact that it actually abolishes slavery.

Albert argues that the Fugitive Slave Clause remains, claiming it serves as “a painful reminder of America’s original sin.”

Albert also argues that because all pronouns in the Constitution are male, it is discriminatory.

“Imagine how schoolchildren must feel when they read the Constitution in their basic civics course. Some will be made to feel less than welcome in their own country… The highest law of the land creates a hierarchy of citizenship.” he writes.

The professor also argues against claims that altering the Constitution as it was written would water it down, claiming that if “racist and gendered terms” are removed, then the Constitution “would celebrate equality and inclusion, and give Americans a text proudly to call their own — one in which they would see themselves and their hopes reflected.”

Many had choice words for Professor Albert:

Doesn't the Constitution also show the progress the US has made? Schoolchildren read the fugitive slave clause but then learn slavery was abolished by amendment following a bloody war. They see masculine pronouns but then learn they've long been interpreted to include both sexes.

"a constitution as a canvas-in-progress, w/ priority to present values."

New take on "living, breathing document" which would mean it would be at the mercy of emotion, crisis, oppressive majority, a tyrant who arises. What if the present values are, say, Jews are the problem.

This trash (and it is trash, the 2nd paragraph shows someone who doesn't understand how amendments work) doesn't belong in a publication dedicated to public policy. Sad thing is people will read it, see who published it, and assume it's relevant.https://t.co/jqPQjHWax8

The true goal of leftists! In other words, destroy the Constitution and put in a totalitarian one world government.

Time to update the language of the Constitution https://t.co/rZV2VvM78s

The ultimate Marxist goal 🤬Time to update the language of the Constitution | TheHill https://t.co/yGqYAC1WOC

A grotesque attack on the US constitution by Canadian law professor @RichardAlbert who works at UT Austin. Read it and weep for American college students.https://t.co/nA71XeNgij