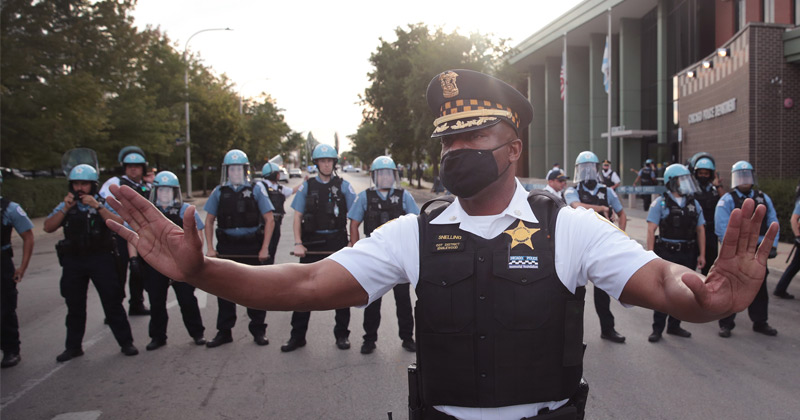 With the George Soros-backed DA Kim Foxx dropping 25,000 felony cases and mayor Lori Lightfoot seemingly unwilling to tackle the latest wave of riots, Chicago is in a bad way. It needs to choose its politicians more carefully.

‘The Windy City’ has always had a bit of a double meaning. Yes, it can get quite blustery in Chicago, but that same wind is what we hear from politicians. Often it’s nothing more than hot air.

Yet over and over again, Chicagoans tend to elect inept politicians to run the city. With riots over the weekend following a shooting involving a police officer, Chicago once again saw mass crime at the point where Mayor Lori Lightfoot had to raise the bridges a la ‘Batman Begins’ (which was filmed in Chicago).

So, in response, Lightfoot has asked Donald Trump to help, but to focus on gun trafficking. But the ATF is already investigating that. And the thing is, that literally has nothing to do with the riots. At all. This request came after Lightfoot had been resistant to having Trump aid Chicago when the city suffered a first round of rioting.

Another element of the city’s dealings worth considering is the fact that District Attorney Kim Foxx has dismissed more than 25,000 felony cases. This is 10 percent more than her predecessor, and in the past these would have been pursued. Of course, this is the same George Soros-backed Kim Foxx who made headlines when she dismissed the Jussie Smollett case. And that was after an aide to Michelle Obama called Foxx, by the way.

As much as I hate to say it, Chicago seems to not know how to pick good leadership. The problem with Lightfoot is that she is completely unable to govern with any amount of competence. In her most recent speech, there was no mention of Antifa doing its rabble-rousing like it did with the first wave of riots.

In fact, listening to her speech, you’d have struggled to be able to tell if there even was a first wave of riots. And the district attorney is a Soros-funded goofball who has indicated that she will drop a case the instant someone from the Obama camp dials her number.

Chicago has suffered from corruption ever since the days of Al Capone. It’s almost as if the city has had an underbelly of rot that has never really been addressed. And there is no evidence to suggest the current leadership is able to deal with it.

The way Lightfoot has treated the rioting, you’d think she has a PhD in Revisionist History. As for Foxx, she seems like something out of the show Dragnet: a type of public servant who does favors for well-known progressives and tries to bury embarrassing behavior.

Like much of the United States, Chicago needs to make a choice when it comes to governance. Do the people want to have incompetent leadership that’s going to end with the city in ashes? Or do they want to have a city they can call their own?

The fact of the matter is that progressives cannot govern Chicago. Everything they have done simply makes things worse, and the murder and gang-violence issues continue unabated because it wouldn’t be “politically correct” to enforce the law.

That’s stupid. Go in there and bust the bad guys. It doesn’t matter what skin color they are. We have laws. They have to be enforced. If they aren’t, more monsters roam the streets hurting people. Is that what Chicago really needs?