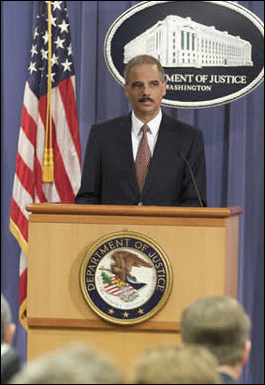 After having already been held in criminal contempt of Congress for an ongoing cover-up of the Obama administration’s deadly “Fast and Furious” gun-running program, disgraced Attorney General Eric Holder is facing a fresh challenge: an effort by some GOP lawmakers to impeach him before the end of the year. According to media reports, the bid to force Holder out of power, if successful, would represent the second impeachment of a cabinet member in American history. Meanwhile, the movement to impeach Obama himself is growing stronger by the day as well — both in Congress and among everyday Americans.

News that a group of Republicans was finally planning to do something about Holder’s lawlessness and defiance was first unveiled during a town-hall meeting by Rep. Ted Yoho (R-Fla.), a liberty-minded freshman in Congress who worked as a veterinarian before taking office. “It’s to get him out of office — impeachment,” Yoho was quoted as saying about the plan in local newspapers, which reported that the audience also applauded the lawmaker’s positions on a number of other issues such as opposition to ObamaCare and the wild federal deficit.

A formal resolution to impeach Holder is already being drawn up, sources on Capitol Hill said. “It will probably be when we get back in [Washington],” Yoho continued during the town-hall session with constituents in the town of Chiefland. “It will be before the end of the year. This will go to the speaker and the speaker will decide if it comes up or not.” While it was not immediately clear which other lawmakers were behind the effort, the list of outraged lawmakers is vast. By July, over 135 congressmen had co-sponsored a resolution calling on Holder to resign immediately. Public fury continues to grow, too.

According to Rep. Yoho’s chief of staff, Cat Cammack, the Florida Republican and his colleagues are pursuing impeachment because of a variety of scandals — primarily the administration’s “Fast and Furious” scheme to arm Mexican drug lords, which left hundreds dead, including U.S. law enforcement officers. “Obviously there is a lot of frustration with our attorney general,” Cammack said. “You can name the botched programs. Fast and Furious has been one of the number one complaints we get in our office, and why no one has been held accountable.”

So far, Holder has managed to escape prosecution after being held in contempt only because the Justice Department he leads refuses to prosecute its boss. However, without a pardon from Obama, more than a few legal experts and activists have said the disgraced official could eventually end up behind bars. If House Republicans are to succeed in impeaching Holder by the end of the year, however, they are going to have to act quickly. According to news reports, there are only 16 legislative days scheduled for the remainder of 2013.

A lot will depend on House Speaker John Boehner, too, who has remained silent on the matter thus far. Despite occasional conservative rhetoric, the top Republican in Washington has come under heavy fire from grassroots leaders for continually selling out, caving in, and protecting the Obama administration from accountability. The most recent example came just last month, when Rep. Boehner capitulated completely to the president’s extortion tactics by agreeing to fund ObamaCare — even though polls showed a majority of Americans supported partially shutting down the government until the healthcare takeover was defunded.

Holder “should be immediately impeached,” noted the Capitalism Institute, citing Fast and Furious, the targeting of journalists who challenge Obama, and the fact that the attorney general has “constantly trampled” on the Constitution. One of the biggest challenges, though, will be getting it past Speaker Boehner. “We’ve constantly said that John Boehner has to go, and this is a good example of why that’s still the case,” continued the popular market-oriented group. “Boehner is in a position where he can pretend to fight Obama most of the time — but defend him whenever it actually counts.”

While public pressure to oust the disgraced Justice Department boss has been escalating for years, successfully impeaching Holder would be historic. In more than two centuries of American history, only one U.S. cabinet-level official has been impeached: Secretary of War William Belknap in the Ulysses S. Grant administration. In 1876, after Belknap was accused of receiving bribes, the House voted to impeach him. The vote took place despite the fact that the war secretary had resigned earlier the same day. After Belknap’s impeachment, the Senate tried him, but he was acquitted when the vote to convict fell short of the required two-thirds majority.

Led mostly by Republican congressmen, the effort to hold Obama’s attorney general accountable has been building up for years. Even before he took office, scandal had long been swirling around Holder, who was caught on video proposing a tax-funded propaganda program to “brainwash,” in his words, the American public against gun rights. He also played a key role in securing presidential pardons for billionaire fugitive Marc Rich and Marxist terrorists with the Obama-linked Weather Underground. Immediately upon his assuming control of the Justice Department, new controversies began blowing up, and a seemingly never-ending series of increasingly serious scandals have plagued his controversial tenure ever since.

The turning point for members of Congress on both sides of the aisle, however, appears to have come when Holder unlawfully defied a congressional subpoena ordering him to hand over documents on Fast and Furious. That federal program, which is still often characterized inaccurately in the establishment press as a “botched” investigation, put thousands of high-powered American weapons in the hands of Mexican drug cartels. Holder and his underlings were also caught lying about the scheme repeatedly in congressional hearings — while under oath, potentially committing perjury — and in letters to lawmakers.

Official documents later revealed that the supposed “drug lords” being “investigated” were already on the FBI’s payroll. Government records also emerged showing that the administration was plotting to use the Fast and Furious violence to intensify its attack on the unalienable right to keep and bear arms guaranteed under the Second Amendment. Eventually, with public outrage boiling over and U.S. law enforcement officers murdered with some of the weapons in question, House Republicans and even some Democrats decided to hold the attorney general in criminal contempt of Congress last summer. The offense should land the perpetrator behind bars.

Despite becoming the first attorney general in U.S. history to hold the dubious honor, Holder has been clinging to power with the president’s support, and even stepping up the lawlessness. Incredibly, earlier this year, the Justice Department he leads was exposed arguing that Obama has the authority to kill Americans without even a semblance of due process. He has also been unlawfully bullying state governments on everything from guns to voter ID. According to the non-partisan group Judicial Watch, Holder is actually among the most corrupt officials in Washington, D.C. — and there were, of course, plenty to choose from.

More recently, even the administration’s traditional allies in the establishment media were outraged to learn that the attorney general had approved unconstitutional spying against Associated Press journalists. “There can be no possible justification for such an overbroad collection of the telephone communications of The Associated Press and its reporters,” noted AP President Gary Pruitt. In an affidavit indicting a federal employee for talking to reporters, meanwhile, Holder’s out-of-control Justice Department claimed a Fox News journalist was a “co-conspirator” in the case — potentially setting him up for prosecution merely for doing his constitutionally protected job.

While impeaching Holder has taken center stage for the moment, the push to impeach Obama is accelerating, too. From highway overpasses to the halls of Congress, countless activists and over a dozen U.S. lawmakers are turning up the heat, having become convinced that ousting the president may be the only remaining option to stop the reign of lawlessness and the never-ending parade of constitutional abuses. Numerous impeachable offenses have been cited by lawmakers and legal experts.

Recent polls suggested that about half of Americans would support impeachment for some of the most extreme scandals — Benghazi, spying on journalists, and using the IRS to persecute conservatives. Meanwhile, the new book Impeachable Offenses: The Case for Removing Barack Obama From Office is being distributed on Capitol Hill by Rep. Steve Stockman (R-Texas). Some lawmakers have said publicly that there are probably enough votes in the House to impeach Obama already. Whether the president or his attorney general is removed from power, though, still depends on how much more the American people are willing to tolerate.