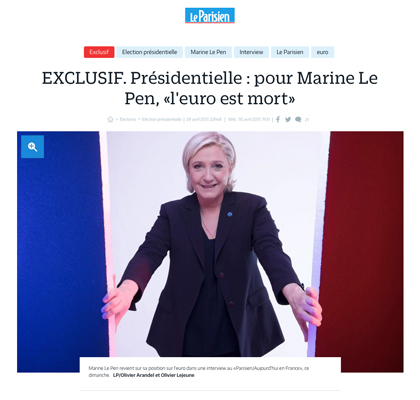 Nationalist presidential candidate Marine Le Pen has declared the “euro is dead” and said France must bring back the Franc, its former national currency, to regain control of France’s economy.

Le Pen, who campaigned on leaving the eurozone and holding a Brexit-style referendum should she win, said that the world’s sixth largest economy should abandon the single currency in favor of a national currency. 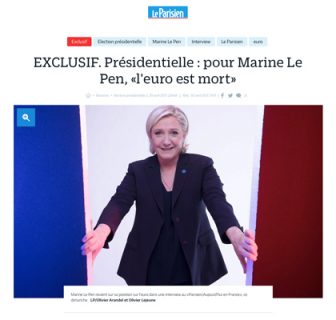 “We need to control the currency, to adjust it to because today the single currency is a burden,” Le Pen told the Parisien newspaper. “We will have a national currency like all other countries, and we will have a common currency together.”

Le Pen added that only large corporations that “trade internationally” should still use the euro or a new currency with similar value.

“I will ask to be able to control our currency. This means turning the single currency into a common euro. A currency that will not concern daily purchases, but only large companies that trade internationally,” she said. “So, it’s as simple as that.”

“We must control the currency and adapt it to the economy because today the single currency is a ball.”

However, in a bid to assuage more moderate voters, Le Pen also said that it would take some time to transition from the single currency to the Franc.

“If everyone is agreed we could take a year or a year and a half to organize a coordinated return to national currencies,” she noted.

Le Pen even stepped down from her father’s Front National party and rebranded her campaign motto to “Choose France” to appeal to a wider audience.

Last week, Le Pen and former Rothschild banker Emmanuel Macron came on top in the first round of France’s election, and will face each other in the runoff election May 7.

Despite his globalist support, even Macron admitted that the euro needs overhauled.

“The truth is we must collectively recognize that the euro is incomplete and cannot last without major reforms,” he said in January.