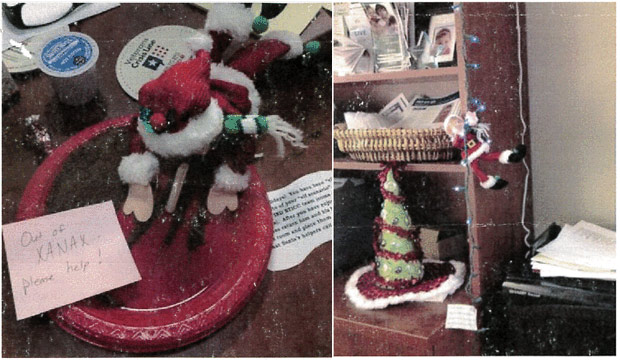 A leaked email from the Roudebush Veteran Affairs Medical Center in Indianapolis shows an employee mocking veteran suicide and other health related issues.

Obtained by The Indianapolis Star, the email, sent by manager and social worker Robin Paul last December, includes several pictures of a toy elf begging for Xanax and hanging itself with Christmas lights.

“Caught in the act of suicidal behavior (trying to hang himself from an electrical cord),” the email states.

After being confronted by an Indianapolis Star reporter, Paul immediately diverted all questions to the public affairs department after exclaiming, “Oh my goodness.”

According to Roudebush spokeswoman Julie Webb, the VA had actually been aware of the email for at least “a couple of months” and had supposedly addressed the issue “administratively.”

“The email is totally inappropriate and does not convey our commitment to veterans,” Webb said. “We apologize to our veterans and take suicide and mental health treatment seriously, striving to provide the highest quality.”

Other photos included in the email depicted the elf sticking its head between the legs of a Barbie doll, “Trying his skills as a primary care provider (doing a pap).”

Issuing a statement, Paul asserted that the email did not represent her view towards her clients and the health epidemic facing veterans.

“I would like to sincerely apologize for the email message and I take full responsibility for this poor judgment,” Paul said. “I have put my heart and soul into my work with Veterans for many years. I hold all Veterans and military personnel in the highest regard and am deeply remorseful for any hurt this may have caused.”

“Paul remains employed at the hospital and continues to manage the clinic, earning an annual salary of $79,916,” Indianapolis Star journalist Tony Cook writes. “She received a $2,000 performance bonus in 2013, records show. More recent bonus information was not immediately available.”

The scandal only adds to the growing list of issues plaguing the department as more than 22 veteran commit suicide every day. Unfortunately, the incident is far from isolated.

2014’s VA scandal revealed that thousands of veterans were being denied care through massive waiting lists as well.