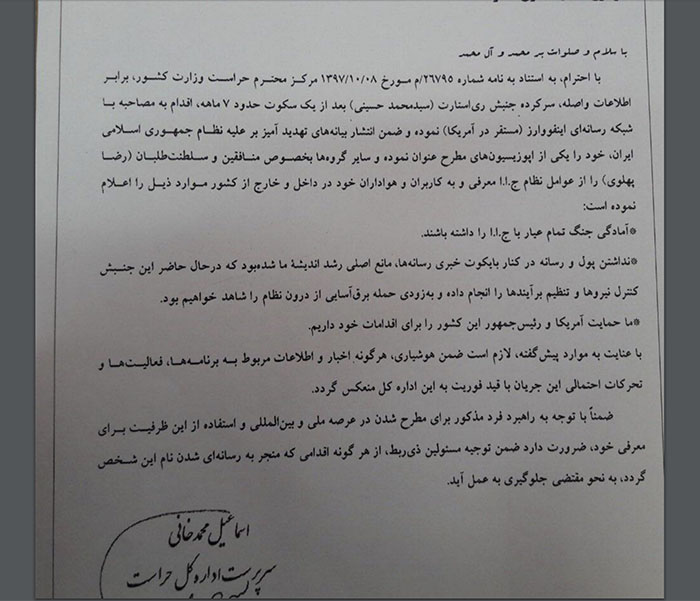 A recently leaked memo from the Islamic Republic of Iran’s Ministry of Information was sent on January 2nd to the Director General of Guardianship for every province and city in the country. It was addressed to all security agencies. The subject was: Restart Threats.

The memo states that after seven months of silence, Infowars interviewed the leader of the Restart movement; Seyed Mohammad Hosseini. (See Interview Below)

Before Infowars met with Mr. Hosseini for our interview, Restart was successfully silenced by the regime while opposition groups MEK and Reza Pahlavi were given their support. This confidential memo suggests that one of the threats to the Islamic Republic is how the Restart leader calls MEK and Reza Pahlavi, ‘agents of the regime’. And instructs all security agencies and media to silence any mention of Restart or its leader.

Below is the original leaked memo. Written in Farsi:

To all security agencies

With respect to prophet Muhammad and his descendants,

With respect, according to letter no. 26795/m, dated 29/12/2018 from the Security head office of the Ministry of Interior, as per the received information, the leader of Restart Opposition (Seyed Mohammad Hosseini) had an interview with Infowars media channel (based in the US) after 7 months of silence. And along side of this he released threatening statements against the Islamic Republic regime, he addressed himself as one of the powerful oppositions, and he called other groups, especially the Monafeghin [MEK] and proponents of Monarchy (Reza Pahlavi); ‘agents of the regime’.

And he declared the following to his fans in and out of the country:

– Be prepared for a proper war with the Islamic Republic regime.

– Not having the funds and media besides the media boycotts would cause our doctrine not to grow, but currently this opposition has controlled the forces and soon we will see an attack from inside the regime.

– We have the support of the US and the president of this country for our plans.

Considering the above points, it is necessary that any news and information related to plans, activities, and probable provocations of this opposition will be reflected to this head office with an indication of ‘urgent’.

In addition, with attention to the strategies the above mentioned person used to make himself known in the national and international arenas, it is mandatory you avoid and prevent any action that causes his name to spread in the media, and you will need to let everyone in charge know this as well.

It is interesting to note; the two opposition groups mentioned in the memo, MEK and Reza Pahlavi, are both connected in many ways to the Islamic regime. MEK is an Islamic militant cult, and Reza Pahlavi is surrounded by leftist reformers.

Before Restart, Seyed Mohammad Hosseini was a beloved and popular television showman in Iran. After moving to America and feeling betrayed by former president Obama’s Green movement, he decided to form a movement that could not be stopped. Here is the story of Restart:

A brief history of Iran: