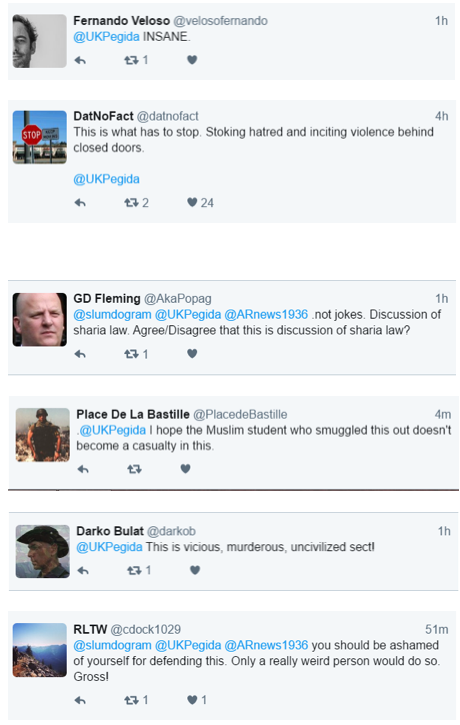 A video that was secretly recorded inside a Muslim school in the UK has gained recent attention on Twitter despite being on YouTube for months.

The radical Islamic woman first illustrates what happens when a person decides to leave Islam.“What are we going to do?” asks the woman in broken English. “We kill him. Kill.”

“The ones who reject Islam?” a British student asks.

“Yeah,” the teacher says. “Kill him. You have to kill him. Do you understand? We’re talking about Islam.”

The video jumps to the woman outlining the punishment for adultery.

“The judgment for adultery,” she asks. “What is the law?”

“Stone him,” a student replies.

“Until he dies,” the woman elaborates. “And the one who is not married?”

“Lash him, lash him,” says a chorus of students.

She then describes with disturbing coldness what the intended punishment is for gays.

“Throw them from the highest place,” she says. “We’re not going to live like animals.”

The Islamic teacher further explains the nature of Allah to her students.

Another British student reads a passage from her textbook:

“’Verily are free from you and whatever you worship beside Allah. We have rejected you and there has appeared between us and you hostility and hatred forever until you believe in Allah alone’.”

“Islam is keeping you away from disbelief and from the disbelievers,” says the teacher. “Any questions?”

A student then asks if being friends with non-believers is allowed.

“No. You understand?” says the teacher. “You don’t have to be friends with them. That is not allowed. Because loyalty is only to the Muslim, not to the kafir.”

The word ‘kafir’ is a derogatory term used in the Muslim world to describe unbelievers.

Rather than condemn this disgusting footage, the shameful liberal media and their ilk are more likely to defend it by decrying the video itself to be an act of “hate speech” toward Muslims. But there are those on Twitter who are calling it out for what it is: insane.