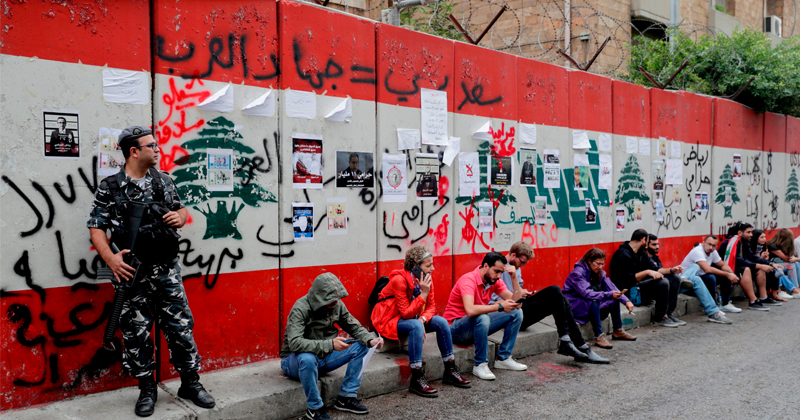 Eleven days into banks across Lebanon being shuttered due to mass anti-government corruption protests which have gripped the nation, in numbers estimated at one million people taking to the streets simultaneously (a stunning quarter of the population), authorities have just put a temporary ban on removing any large sum of physical dollar currency from out of the country.

The order was issued Sunday by Public Prosecutor Ghassan Oueidat who imposed the ban on all air and land borders, in effect “until the central bank determines a new mechanism for regulating such transfers.” Previously a customs permit was required to take large cash amounts out of the country, but there’s now concern that a potential run on the banks could crash the economy the moment they finally do open.

We reported last week that the country’s banking association claimed it was necessary for the banks to close due to “safety concerns”. The association has since been reportedly engaged in crisis meetings over how to prevent a “panic mode” scramble on the part of the public to remove all deposits.

Over the course of the protests, which have been mostly peaceful but at times involved clashes with police and blockage of major roadways, banking operations have been “limited to paying out customer and employee salaries via ATMs” in a situation which has also hit war-torn Syria, given many Syrians rely on the neighboring Lebanese banking system to hold dollars and savings following the collapse of Syria’s currency.

Joe Biggs joins Owen to go over the news that President Trump has officially announced that the DOJ will be investigating those involved in the Deep State coup against him.

It’s still unclear when banks will actually open, with the chairman of the Association of Banks in Lebanon saying last week that banks are to re-open “once normalcy is restored.”

The most potent case for cryptocurrencies: banks are never there when you need them. And they are trying to bully the public so they avoid accountability and profit disbursements.
Bankers are legal crooks.#bottomup #bitcoin#Lebanon https://t.co/Fp3QPFFkJQ


In recent years the country has suffered a severe slowdown in capital flows, and difficulty of importers securing dollars at the pegged exchange rate, as well as periodic collapse of public services – due to frequent strikes, work stoppages, and lack of public funding.

Lebanon, where the Lebanese pound currency is pegged to the dollar, is one of the world’s most heavily indebted states.

Capital inflows needed to finance the state deficit and pay for imports have been slowing down, generating financial pressures not seen in decades, including the emergence of a parallel market for dollars.

At the heart of the crisis and of the protests is extreme lack of confidence in the local currency and corrupt officials which oversee the depleted system.

As Asia Times pointed out last week, “Lebanon’s credit rating was downgraded to junk in August, with the global ratings agency Fisk raising the possibility the Eastern Mediterranean nation could default on its debts.”

Comey Laughs About Being Under Criminal Investigation

James Comey discusses walking free while rubbing it in our faces.