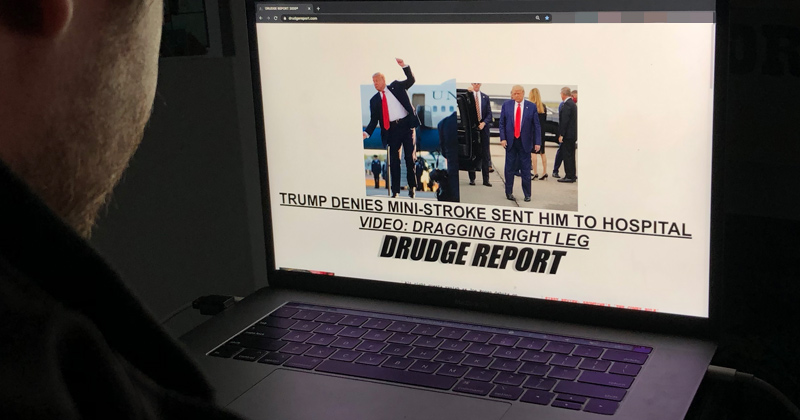 The keyword “Drudge” began trending Tuesday as social media users contrasted DrudgeReport.com’s previous fervent support of the president with the site’s current main headline and image, which appear to suggest Trump could be hiding a physical disability.

The main headline led many to claim Drudge was abandoning Trump and now trolling the president with the “Hillary Clinton treatment,” referring to his aggregation of news items during the 2016 election which reflected negatively on the state of Clinton’s health. (That rumor was later ultimately confirmed when she collapsed during a 9/11 memorial.)

It’s all downhill for Trump when Matt Drudge starts using unflattering pictures of him pic.twitter.com/nyzNJ3qAtW

Um… what the hell is going with Matt Drudge? I'm not complaining, but has anyone checked on him? https://t.co/D2WrBv54Hm

Drudge calls out the real possibility that Trump had a stroke. pic.twitter.com/HH5RxsjsdZ

Even Matt Drudge can see a change coming. As Bob Dylan once famously said, "You don't have to be a weatherman to see which way the wind blows." pic.twitter.com/LcFxyYzwND

Trump drags his right leg, has no balance, and slurs his words.

So much so, even Matt Drudge admits there's a strong possibility that Trump has suffered a stroke.

Matt Drudge's shift away from Trumpism is remarkable. A complete 180 for probably the largest conservative traffic driver in the world. pic.twitter.com/xCZq3YKwdo

“Matt Drudge’s shift away from Trumpism is remarkable. A complete 180 for probably the largest conservative traffic driver in the world,” tweeted NBC News’ Ben Collins, hitting on a trend many in conservative circles claim to have noticed recently.

The latest “mini-stroke” headline comes on the heels of a new book from New York Times correspondent Michael Schmidt titled, “Donald Trump v. the United States,” in which he claims Vice President Mike Pence was told to be on standby last November after POTUS was checked in to Walter Reed Medical Center.

On Tuesday, Trump issued a tweet denying the claim that he’d “suffered mini-strokes,” but as The Hill notes, Schmidt’s book does not make the claim.

It never ends! Now they are trying to say that your favorite President, me, went to Walter Reed Medical Center, having suffered a series of mini-strokes. Never happened to THIS candidate – FAKE NEWS. Perhaps they are referring to another candidate from another Party!

“It never ends! Now they are trying to say that your favorite President, me, went to Walter Reed Medical Center, having suffered a series of mini-strokes. Never happened to THIS candidate — FAKE NEWS,” Trump tweeted, adding the news may be more suitable for 77-year-old presidential opponent Joe Biden.

“President Donald J Trump has asked that I, Dr. Sean Conley, Physician to the President, address the recent public comments regarding his health. I can confirm that President Trump has not experienced nor been evaluated for a cerebrovascular accident (stroke), transient ischemic attack (mini stroke), or any acute cardiovascular emergencies, as have been incorrectly reported in the media,” Dr. Conley said in a statement obtained by The Hill.

“The President remains healthy and I have no concerns about his ability to maintain the rigorous schedule ahead of him. As stated in my last report, I expect him to remain fit to execute the duties of the Presidency.”

Trump did fire off a tweet last November claiming he’d visited Walter Reed for a yearly physical and reported “everything very good (great!)”

Visited a great family of a young man under major surgery at the amazing Walter Reed Medical Center. Those are truly some of the best doctors anywhere in the world. Also began phase one of my yearly physical. Everything very good (great!). Will complete next year.

On Tuesday afternoon, Donald Trump himself, who reportedly met with the website’s proprietor Matt Drudge inside the Oval Office in 2017, addressed the “stroke” report, asserting the “Fake News report on Mini-strokes is incorrect,” and this is why Drudge is “doing poorly.”

Drudge didn’t support me in 2016, and I hear he doesn’t support me now. Maybe that’s why he is doing poorly. His Fake News report on Mini-Strokes is incorrect. Possibly thinking about himself, or the other party’s “candidate”. https://t.co/9FraoFqOKq

In another recent “stroke”-related controversy, Joe Biden said in a rare appearance in Pittsburgh Monday that Donald Trump was “stroking violence in our cities,” getting called out for invoking the wrong terminology.