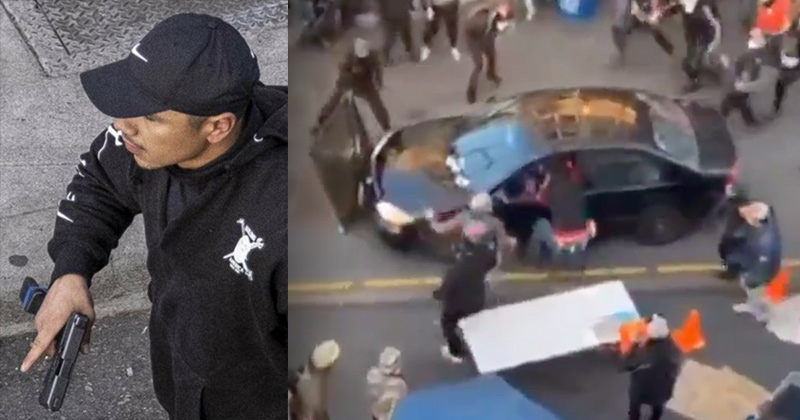 A man who shot a protester in Seattle, Washington on Sunday was outed as a “white supremacist” by liberals on the internet, but it turns out they were totally wrong.

Video shows the man being attacked by multiple rioters while driving down a street being blocked by protesters before the driver comes to a stop when demonstraters place a barricade in his way.

The driver was surrounded by attackers hitting his car and when one of them reached into his vehicle to punch him in the face, the motorist shot the man.

Here's is more complete footage of what happened in Seattle, with the car speeding in, an apparent shooting, and the man getting out with a gun.pic.twitter.com/PnDbHwYy28

In the following video, the man who was shot admits he attacked the driver, saying, “I punched him in the face.”

Here's an interview of the man who was shot.

The same day the incident took place, Black Lives Matter activist Shaun King told his one million Twitter followers, “This man in the Black car, a known white supremacist, was clearly planning to run protestors in Seattle over.”

This man in the Black car, a known white supremacist, was clearly planning to run protestors in Seattle over. People filming saw it unfolding.

He then shoots a man.

Gets out of the car brandishing his gun.

Journalist and activist Andy Ngô corrected King on Twitter, writing, “Seattle suspect is Nikolas Fernandez & he is Latino. According to witness, driver Fernandez was chased by mob. He brandished a handgun. A man allegedly reached inside the car to try to take gun & got shot in the arm. Driver surrendered himself to police immediately.”

#Seattle suspect is Nikolas Fernandez & he is Latino. According to witness, driver Fernandez was chased by mob. He brandished a handgun. A man allegedly reached inside the car to try to take gun & got shot in the arm. Driver surrendered himself to police immediately. #antifa pic.twitter.com/HIpMStmTlp

Despite being called out by Ngô and local news outlets confirming Nikolas Fernandez was the individual who shot the violent protester, King’s tweet is still up.

The Seattle Times reports, “Prosecutors had requested that Nikolas Fernandez be held on $350,000 bail, but the judge, instead, set bail at $200,000, then lowered it to $150,000 after Fernandez’s family addressed the court and spoke of Fernandez’s ties to the community and his inability to pay, said Casey McNerthney, a spokesman for Prosecutor Dan Satterberg. As of Monday evening, Fernandez remained jailed, jail records show.”

Protesters and internet users were upset with the fact the shooter was able to peacefully turn himself in to the police.

However, video shows Fernandez approaching officers with his hands raised and telling them what just took place.

“I had to shoot somebody, they were trying to jack my car,” he said as he walked towards police with his hands raised immediately after the shooting.

@johnmitch live stream of the moment the shooter at the Seattle protest today was arrested.#seattleprotest pic.twitter.com/N8j9xyglYm

Fernandez’s next court appearance is scheduled for Wednesday at 2:30 p.m. where any charges will be announced.