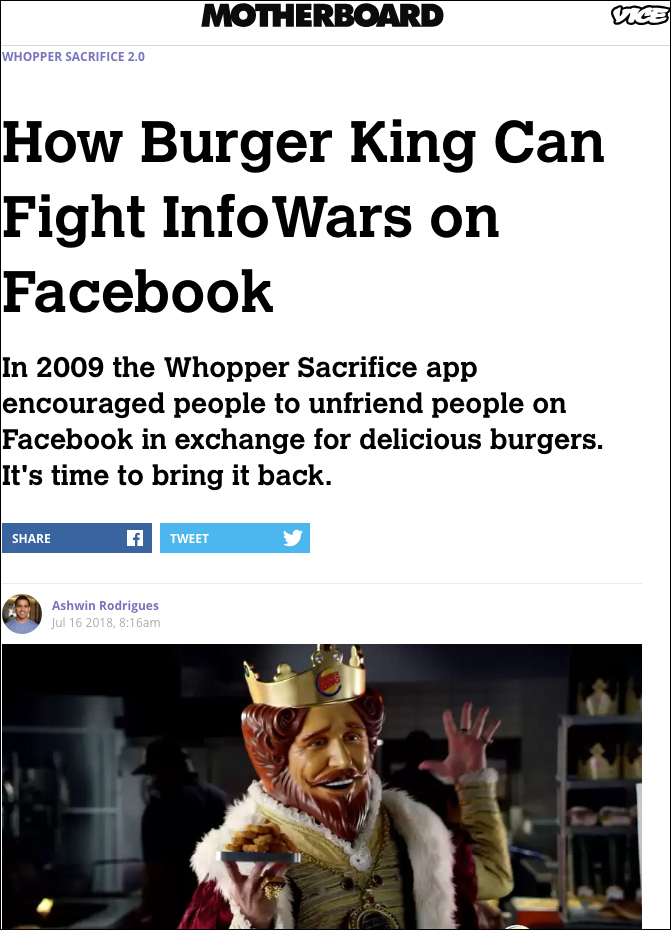 A Vice editor has cooked up a greasy plan to fight Infowarriors on Facebook. 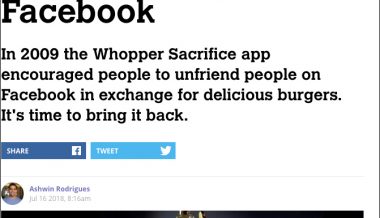 Writer Ashwin Rodrigues is frustrated the social network hasn’t yet taken away Infowars’ freedom of speech.

“How are we to deal with a multi-billion dollar corporation that is refusing to moderate bad-faith actors who are poisoning the political landscape with far-right conspiracy theories while gutting the business model of traditional journalism?” Rodrigues asked Monday.

Rodrigues reports the app, which was subsequently shutdown by Facebook, caused a total 234,000 Facebook friendships to end.

“Why not repurpose this app to discourage Facebook users from following or ‘Liking’ the InfoWars Facebook page? What better motivator, or ‘carrot’ can a Facebook user have, than beef?”

Here is how Whopper Sacrifice 2.0 would work:

After agreeing to Whopper Sacrifice 2.0’s terms and conditions, the app would show the user all the friends that “Like’ the InfoWars page on Facebook. These users would be rewarded with a Whopper™ for unfriending each of these friends. The unfriendee would get a message: “You have been unfriended for following InfoWars. Did you know InfoWars’ owner Alex Jones was sued by the Sandy Hook families for claiming the massacre was a hoax put on by the government?”

The App would also have a “Red Meat Pill” feature. Any Facebook user who follows InfoWars would be offered a Burger King Whopper™ in exchange for sharing The Whopper Sacrifice 2.0 app on InfoWars’ Facebook page, then un-liking the InfoWars Facebook page.

Obviously, as Facebook knows far too well, there will be “bad actors” who will game the system. Tricksters may re-Like the InfoWars page after redeeming their coupon for a Burger King Whopper™. This is fine. The lethargy produced from consuming a fatty beef sandwich might at least stave off the need to promote conspiracies InfoWars serves up to its Facebook audience.

While seemingly approaching the issue tongue-in-cheek, Rodrigues reveals he actually tried to float the idea to Burger King.

“What’s stopping this app from being a reality today? Nothing, except Facebook, its app guidelines, and Burger King’s unwillingness to respond to my calls and emails.”

The reason Facebook initially terminated Burger King’s app was because it violated one of their policies by showing people who unfriended them.

Furthermore, Facebook told Rodrigues it likely would not approve an app that incentivizes “people to take actions on Facebook.”

Bummed his idea went up in flames, Rodrigues – who swears he’s not “in the pocket of Big Whopper” – tells readers to manually de-friend Infowars supporters and purchase a Whopper as a reward.