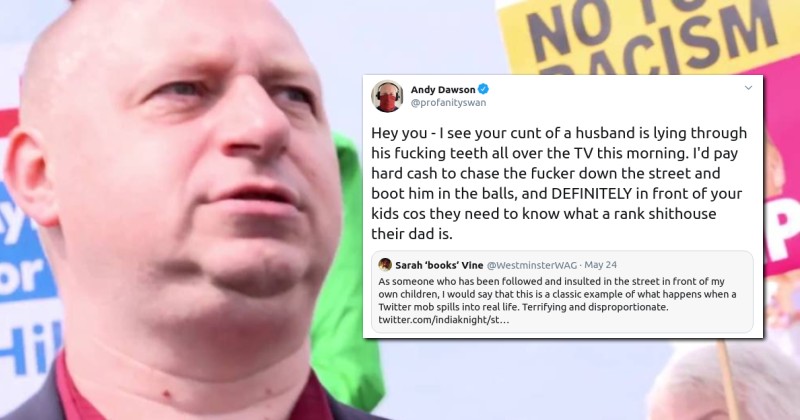 A leftist podcaster who writes for the Guardian has tweeted his desire to physically attack a Conservative MP in front of his children.

Andy Dawson, who writes for major left-wing newspapers the Guardian and the Mirror and also co-hosts a podcast called Athletico Mince, was responding to a tweet by Sarah Vine, wife of Michael Gove MP.

“As someone who has been followed and insulted in the street in front of my own children, I would say that this is a classic example of what happens when a Twitter mob spills into real life. Terrifying and disproportionate,” tweeted Vine.

She was responding to video footage of Dominic Cummings being harassed by his own neighbors in response to a controversy where critics claimed Cummings, an advisor to Boris Johnson, violated lockdown to travel north in search of urgent care for his child.

Dawson chose to express his anger over seeing Gove defend Cummings on television by threatening to viciously attack Gove and have his children witness their father being beaten up.

Verified leftist Andy Dawson, a writer for the Guardian and the Daily Mirror, not only advocates for political violence (ie terrorism) against a sitting cabinet minister, he's willing to finance it as well.
Exactly what democracy is left in the UK? pic.twitter.com/DJS4xYk8Jp

“Hey you – I see your cunt of a husband is lying through his fucking teeth all over the TV this morning,” tweeted Dawson. “I’d pay hard cash to chase the fucker down the street and boot him in the balls, and DEFINITELY in front of your kids cuz they need to know what a rank shithouse their dad is,” he added.

“Verified leftist Andy Dawson, a writer for the Guardian and the Daily Mirror, not only advocates for political violence (ie terrorism) against a sitting cabinet minister, he’s willing to finance it as well. Exactly what democracy is left in the UK?” asked Breitbart’s Chris Tomlinson.

The “so much for the tolerant left” cliché has been a meme for years, but this once again underscores how the same people who continually whine about abuse, harassment and hate are in fact the most hateful people in politics.

It also highlights the two tier system operated by social media giants like Twitter, which routinely bans conservatives for their opinions yet allows clear threats of violence, even against elected members of Parliament, to go unpunished.

However, he isn’t receiving much back up, with even leftists surprised by his vicious outburst.

Was a big fan of this podcast, but not gonna be listening to it again, not while Andy Dawson is still there. His childish outburst against Sarah Vine has put me off the idea of supporting him in any way. I don't like the tories either, you don't have to be cruel about it. 🙁

@Spotify Dear Spotify, you currently host a podcast run by the above individual Andy Dawson under Athletico Mince. Due to the threat of violence in front of children made in the above post I believe you should review his ability to promote such hate speak to a wider audience.

Andy Dawson (Guardian and Daily Mirror contributor among other things) sent this message about Michael Gove to his wife Sarah Vine.

Shocking vitriol and possibly illegal under the Malicious Communications Act.

The disappointing thing is that at least 775 people liked it. pic.twitter.com/NbW8ddh8du