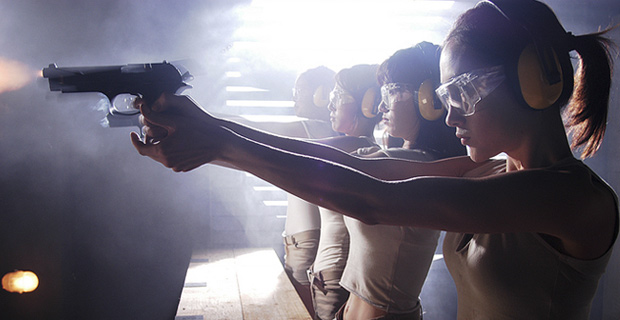 On Tuesday, Raw Story said the push to legalize campus carry by pro-gun activists is “sheer assh*lery on many levels” and is also a “subtle form of rape denialism,” whatever that means.

“…These laws are functionally more pro-rape than anti-rape,” Raw Story’s Amanda Marcotte wrote. “After all, most campus rapists haven’t been convicted — duh — so it’s perfectly legal for them to own guns.”

“And, unlike victims, they are planning for the rapes to happen and so can plan to have access to a gun when they corner their victims.”

Of course this “logic” is flawed. Gun control does not stop criminals from packing guns. Do you really think thugs who are willing to commit rape give a damn about gun laws?

Also, women CAN plan ahead to prevent themselves from being victimized – that’s the entire point of not only concealed carry, but situational awareness as well.

And it’s ridiculous to suggest that affirming a woman’s right to self-defense leads to more rapes. You might as well say that up is down, freedom means slavery and ignorance equals strength.

The truth, not surprisingly, is the exact opposite of what Raw Story claims: more guns equals less crime.

“Between 2007 and the preliminary estimates for 2013, murder rates have fallen from 5.6 to 4.4 per 100,000 – a 22% drop in the murder rate at the same time that the percentage of the adult population with [concealed carry] permits soared by 130%,” reported a 2014 study from the Crime Prevention Research Center. “Overall violent crime also fell by the same percentage, 22%, over that period of time.”

“Using this new state level permit data from 2007 on, our analysis suggests that each one percentage point increase in the percent of the adult population holding permits is roughly associated with a 1.4% drop in the murder rate.”