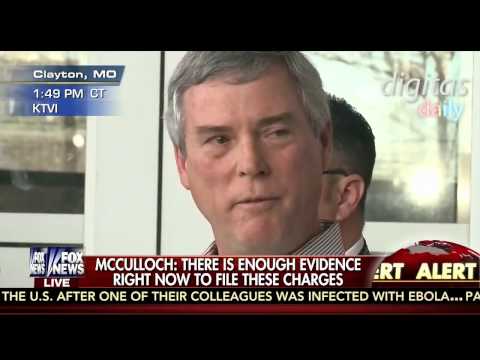 Leftist media figures rushed to defend Jeffrey Williams, the man who shot and seriously injured two police officers in Ferguson last week, by claiming he was mistreated by police and attempting to distance him from the ‘Black Lives Matter’ movement.

However, Washington Post writer Wesley Lowery attempted to cast doubt on this conclusion by citing four protest regulars who said they had never seen Williams, leading Lowery to claim that Williams was not a regular.

That's not to say he's never protested in Ferguson – literally hundreds maybe thousands have – but safe to say he's not a regular.

“That’s a strange conclusion to draw after only speaking to four people out of, what he admits are, thousands of protesters,” remarks Carmine Sabia.

USA Today’s Yamiche Alcindor and the Los Angeles Times’ Matt Pearce then jumped in to try and disassociate Williams from the ‘Black Lives Matter’ movement.

Here's the issue: Anyone can say they are a protester and be correct. It's how you self-identify. But was Williams a regular? Don't think so

Judging from what I and other reporters remember, and some prominent activists, this guy was no mainstay, if he had ever protested at all.

Things became more ridiculous when Lowery repeated a conspiracy theory dreamt up by Bishop Derrick Robinson that Williams had “shot in the air” at robbers and didn’t mean to target police, ignoring the fact that Williams’ Facebook page is littered with violent anti-cop posts.

Per Robinson, Williams claims he was robbed and "shot in the air" at robber. Regrets that shots hit police officers

Lowery then moved on to portray Williams as the victim by repeating the unsubstantiated claim that he was beaten by police officers after being arrested.

According to Robinson, Williams was beaten by police last night, and his chest and body covered in bruises that the minister says he saw

Imagine if a right-wing anti-government tea partier had shot and seriously injured two police officers. Do you think the national media would be running defense for him or attempting to distance him from other tea party sympathizers?

Once again we see the establishment press affording legitimacy to the ‘Black Lives Matter’ movement despite its constant invocation and practice of violence, just as Time Magazine published an article titled Ferguson: In Defense of Rioting as mainly black-owned businesses were being burned to the ground last summer.

NYPD cop killer Ismaaiyl Brinsley carried out his brutal execution of two police officers in “retaliation” for the shooting of Michael Brown, leading ‘Black Lives Matter’ protesters to express support for the murders by chanting the same slogans Brinsley had posted on his social media pages.

Dozens of ‘Black Lives Matter’ demonstrators were also filmed in New York chanting, “What do we want? Dead cops. When do we want it? Now!”

The mainstream media clearly has an agenda to hide the fact that elements of the ‘Black Lives Matter’ movement are violent, affording legitimacy to a George Soros-backed campaign to foment racial division in America while completely discrediting opposition to the genuine problem of police brutality.