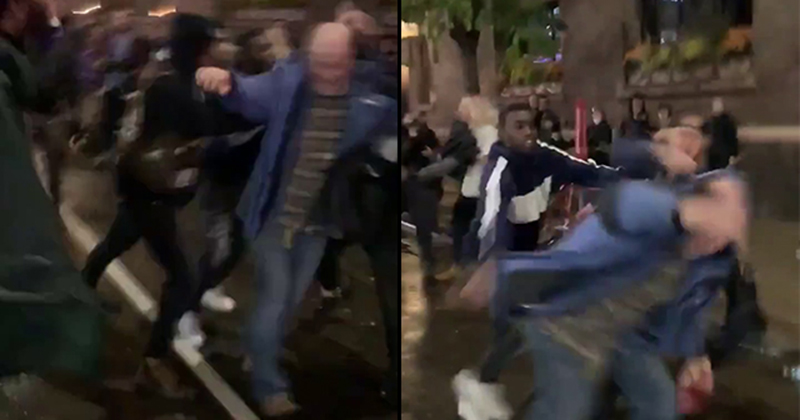 “Trump supporters are literally fleeing the event after it ended as protestors are waiting around attacking attendees as they leave the arena,” Blaze TV’s Elijah Schaffer commented after capturing one of the mob’s assaults on film. “It is not safe in Minneapolis any longer for Trump supporters.”

It is not safe in Minneapolis any longer for Trump supporters. Please stay away from the vicinity and do not come out with branded gear pic.twitter.com/BLsJbtct0k

The assault looked awfully similar to other mob assaults caught on film recently in the “new” Minneapolis.

The hate-filled mob was also filmed attacking journalists and knocking Trump hats off Trump supporters’ heads before assaulting them:

Protester knocks off Trump supporter's hat then goes for a video journalist's camera.

Anti-Trump protester shocked & visibly upset after he gets thrown to the ground… pic.twitter.com/zgPkCdP7Sk

The mob also called a Trump supporter a “Nazi” before attacking him:

A man leaving tonight's Trump rally in Minnesota was spotted by a group of protesters who yelled: “There’s a Nazi over here!” They then attacked the man, slapping and pushing him until he ran away. pic.twitter.com/HfL2kKE9jn

Alex Jones breaks down the video of PragerU’s Will Witt asking students on the Cal State Los Angeles campus if using the term “illegal alien” should be made into a crime, which recently happened in New York.

The mob reported stole Trump hats and flags off Trump supporters so they could set them on fire in the street:

They then left the ashes as a vigil against fascism, leaving a f*ck Trump sign on the top of the pile

This is tolerance. This is the left pic.twitter.com/jFhVNXrgId

Protesters burning Trump hats and flags in the street. pic.twitter.com/ATVzE9CG5J

Trump flag being burned as Trump supporters chant nearby. This is getting a little crazy. #TrumpMinneapolis pic.twitter.com/rkcWXA3ACr

An hysterical liberal woman was filmed screaming “F**K YOU” at the top of her lungs in a Trump supporter’s face (who responded in like kind):

Moments like this honestly have been rare. In part because I think both sides of been kept away from each other. But when they mix it’s very not good. #TrumpMinneapolis pic.twitter.com/zDSLwLyq6j

The leftist mob was also seen destroying police barricades and waving the flag of a foreign nation:

The situation outside the Trump rally in Minnesota is quickly deteriorating

A protestor can be seen waving the Chinese flag in front of riot police. While people in Hong Kong wave American flags for freedom, we wave Chinese flags pic.twitter.com/XVl551kyqZ

Arrests have been made. Antifa is present. Violence is common place at this point. Typical end of the night anarchy pic.twitter.com/ujnDNQIVtf

What in the hell?

This should give everyone a clue as to why Mayor Jacob Frey has no interest in stopping the roaming mob violence in the city he’s supposed to be serving. These roaming mobs serve to intimidate and suppress anyone who dares to question he and his cronies’ rulership and random innocents being attacked is clearly a price Frey is willing to pay!