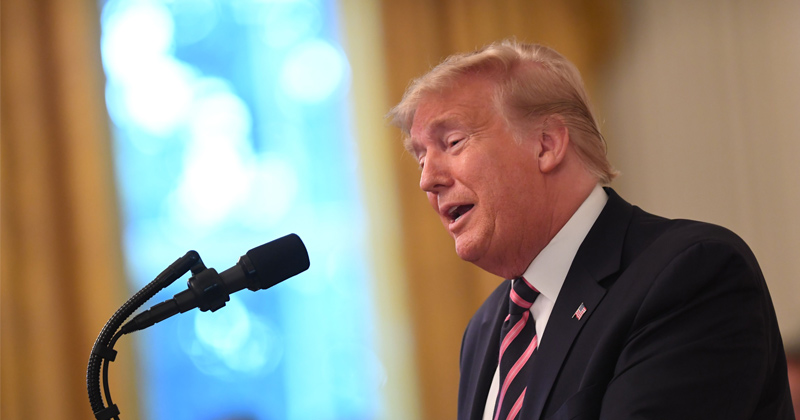 Leftists freaked out after president Trump said “bullshit” during his High Noon Speech from the White House on Thursday.

President Trump said the “Russia, Russia, Russia” obsession by his critics was “bullshit” during his speech from the East Room of the White House in which he responded to the recent impeachment trial which cumulated in his historic acquittal by the Senate.

"It was all bullshit." pic.twitter.com/odh1XYoJ9n|#MAGA

“It was all bullshit” President Trump says on live TV talking about the liberal witch hunt. #bullschiff #bullshit pic.twitter.com/ONJz1kWz5Z

It didn’t take long for left-leaning reporters and critics of President Trump to blast his language, with one CNN commentator asking “where are the civility police?”

"It was all bullshit." Trump on the Russia investigations. Way to keep it dignified, a-hole.

@realDonaldTrump just said "bullshit" on TV, once again, projecting what he himself is on others. A liar & conman, perhaps the biggest & best this country has ever known. Well, at least #Trump does something well. As for Congress members who serve as accomplices, #KarmaIsComing

Trump in the White House: “It was all bullshit.”

And where are the civility police? pic.twitter.com/9SW8ca9D7v

I'm sure all the people who complained about Nancy Pelosi's lack of decorum for tearing up a speech will be apoplectic over Trump using the word "bullshit" at a White House press conference.

It's actually hard to imagine previous Presidents using coarse language like that, in such a public way.

What president says "Bullshit" in a live address to the American public?
Donald Trump, a low-life of low-life presidents!#TheUnscrupulousTrump

Not everyone was claiming outrage, however:

"It was all bullshit." – President Donald Trump.

TRUMP 2020 – No more Bullshit !!! He calls it like he sees it – it was 3 years of BS . Love that he isn’t politically correct when he calls people and injustice out .

Tune in to the show below: