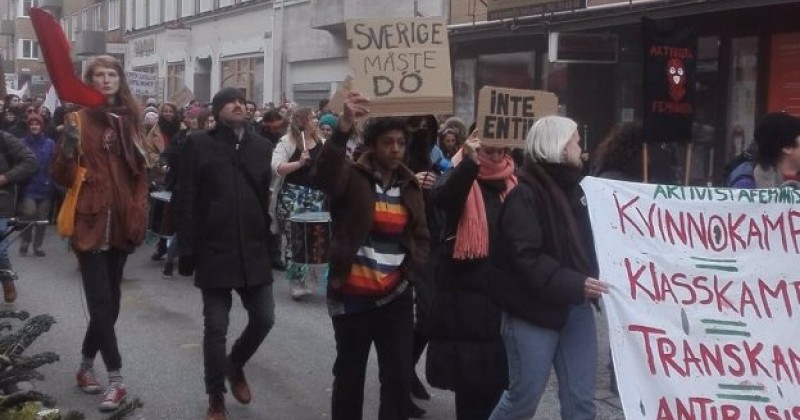 A left-wing activist displayed a sign during an International Women’s Day march that said “Sweden must die.”

Let us know how you really feel.

The banner was carried during the protest in Malmö yesterday.

“Not really what the labor movement’s pioneers August Palm and Kata Dalström might have intended,” the Malmölistan party wrote on Facebook in response to the image.

The notion that “Sweden must die” presumably incorporates the demographic obliteration of its native population.

Ethnic Swedes will be a minority in their own country within 40 years, possibly sooner, with 10 per cent on newborn babies in Sweden currently having Islamic names.

Grenade attacks and deadly shootings in Sweden – concerns over which were once derided as a “conspiracy theory” by the media – now represent a “national emergency” according to a report by Quillette.

Violent crime and sexual assaults have significantly increased since the country accepted a new wave of migrants in 2015.

Earlier this year, Swedish author Björn Ranelid warned that the level of crime and violence the previously sedate country is experiencing amounts to a “small scale war.”

Meanwhile, in Malmö itself, authorities responded to grenade attacks and soaring violent crime by inviting local gang leaders for a friendly chat over some pizza.