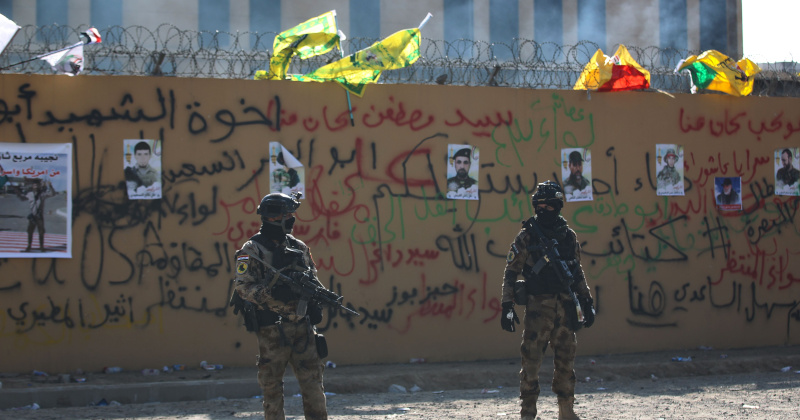 VoteVets, a self-styled progressive and Trump-hating group has been caught hyping the prospect of American casualties in the siege on the American Embassy in Baghdad.

As one respondent put it, “That’s a bizarre look for a veterans group.”

The far-Left group started in 2006. It’s a 501 (c)(4) political action group whose mandate is to educate the public on its issues. But as OpenSecrets.org reports, VoteVets, run by a handful of people, actually spends most of its money supporting candidates. Democratic candidates, that is.

It is supported by unions and has funneled money to David Brock’s anti-Trump oppo research group, according to the Center for Responsive Politics.

The group created a campaign ad in 2016 calling Trump a “cheap fraud.”

It seems odd that a Leftist group is against the one candidate who promised an end to “endless wars.”

The landing page on the group’s website calls Trump a “national security threat.”

Among their reasons is Trump pulling out of the Iran deal and the Paris Climate Treaty. Sure.

So this sentiment is right in line with the group’s Trump Derangement Syndrome affliction: 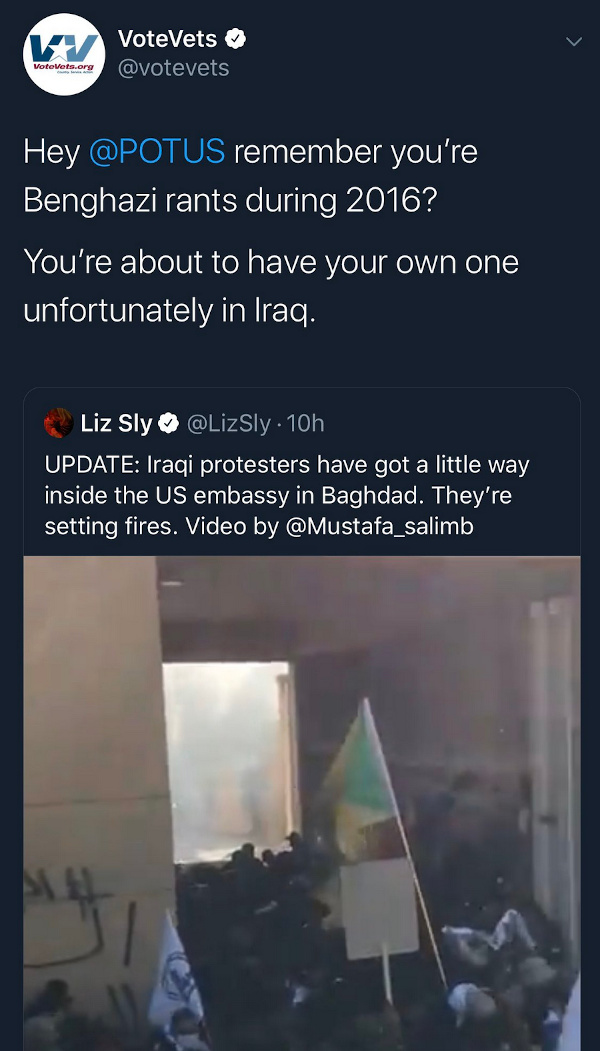 There’s no love lost between the president and VoteVets. He’s blocked them on Twitter.

The Commander in Chief can block @VoteVets, the voice of 500k military veterans and families, but we will NOT be silenced. pic.twitter.com/SaCN5hKU9R

Whoever took the helm of the VoteVets Twitter account today not only couldn’t spell – it’s “your,” friend – but they seemed to cheerlead a tragedy for Trump complete with a smoke-filled video at the embassy:

“Hey @POTUS, remember you’re [sic] Benghazi rants of 2016. You’re about to have one of your own unfortunately [sic] in Iraq.”

The group also claimed that Trump was “violating” the Iran agreement he pulled out of. Whose side are these guys on, anyway?

We cannot stress enough that Trump violating the Iran Deal has allowed it all to spiral downward, to this.

The question, now, is whether this is exactly what Trump wanted to see all along, to get a neocon Iran War?https://t.co/miA3HAp9Bp

It’s reasonable for this group to think about it, too. But to almost gleefully wish for it? Now that’s just sick, “Unfortunately.”

Infowars correspondent and former GOP delegate Richard Reeves joins The Alex Jones Show to break down how to get Trump re-elected in 2020.